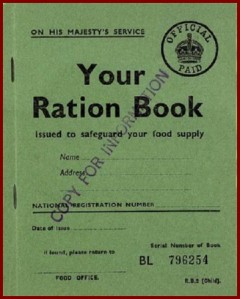 I thought I’d leave a discussion of jazz and the British honours system until we got to the 60th anniversary of the introduction of rationing, which falls today.

The press never points out the statistically obvious fact : hundreds of British honours are given to people in Civil Service departments, local authorities and other publicly-funded bodies, and are given in accordance with the grade people have reached. And therefore- with my linear regressions r-squareds to the fore again, I venture to suggest that there are at least a few where the correct citation should be: “for doing their job.”

The people who make our jazz scene happen are at the opposite end of the scale. Things mostly happen through some combination of individual drive, passion and endeavour, persistence, volunteering, going beyond the call, reckless abandon.

Which could be a reason why honours into jazz are so….rationed.

Look in this year’s New Year’s Honours list and there is one (thank you RT!), tucked away in the Foreign Office’s list, a well-deserved OBE for

Many congratulations. If anyone upstairs is reading this: here’s a quick list of some of the desrving, which, please, please, should be added to forthwith: Kenny Wheeler, Stan Sulzmann, John Taylor, Eddie Harvey.