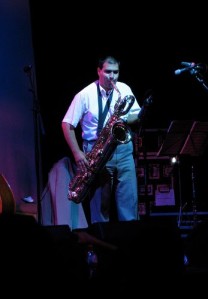 It is useful to be reminded, every so often, how much pleasure this music gives to people. That was something Starbucks worked out at a very early stage: the sound of jazz lures people to linger in coffee bars. And when I looked around a nearly full Bishopsgate Hall for the City Music Society’s lunchtime concert today, just at a moment when the audience was about to break into applause, I registered a fact: there were more benign smiles on more faces at this gig than I have seen anywhere else so far this year.

“Do you really want another one then?” was Andi Panayi ‘s slightly surprised question to the audience at the end of the published programme. Faced with a categorical and very vociferous “YES!!!” , he took a look at the promoter, who had presumably told him to respect the clock and be finished by 2pm. And the quartet of Panayi (baritone saxophone), Mark Nightingale (trombone) Simon Woolf (bass ) and Steve Brown (drums) happily, dutifully, imperatively launched into Gerry Mulligan’s “Walking Shoes” – tempo slightly up from THIS

This quartet is a band without a guitar or piano, and yet it plays harmonically complex music with absolute surety of purpose, because all four players contribute so clearly to underlining and supporting and promoting the presence of the harmony. “Out” playing, the colourful, descriptive, anarchic have their place, so long as somone chordal is taking care of business. Remove that prop, and you need harmonically hyper-aware musicians. And with the three here who take on that responsibility, you’re in very safe hands indeed. If there’s a rebel in there, it has to be Brown. He can, and does, challenge, he leads the others astray, adrift, up unexpected dark alleys. But it is inevitably with the broadest, most infectious smile in the band.

If I had to be grumpy about anything in this gig, it is that there was the occasional hint of cruising on autopilot. And Panayi’s double recorder trick in “Pluto” can have all the legendary antecedents you like, I found the novelty wore off quite quickly.

But when it plays its core repertoire – Mulligan, Art Farmer, and compositions by Nightingale and Panayi – this is a matchless group.

All this joy, all this pleasure reminded me that nine days previously, Panayi had played a very special role at the 40th anniversary concert at the Stables. All of the band that night had known about the death of John Dankworth before they went on stage, but Panayi had the responsibility of playing the alto saxophone lead which would have been taken by Dankworth himself in Ellington’s “Tonight I shall sleep,” immediately after the announcement to the audience from the stage that Dankworth had died.