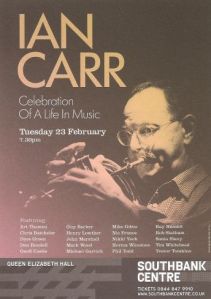 The benefit evening for Alzheimer’s charities, celebrating the life of Ian Carr, at the Queen Elizabeth Hall on 23rd February, raised £7,000, significantly more than budgeted.

The performance of Northumbrian Sketches from the concert was recorded by Jazz on 3, and will be broadcast on April 19th.

Meanwhile, for all things Ian Carr, there’s one place to go: