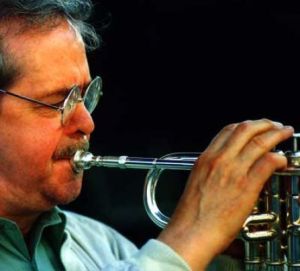 Last night’s audience at the opening concert of the tour at the Anvil in Basingstoke was treated not just to “some new music” by Kenny Wheeler, as had been trailed. What a humungous understatement that is! We heard one of the most remarkable melodic outpourings in music: ten substantial, important and remarkable new pieces.

As this band continues on its way, and gets deeper into the music, this tour will prove to have been something very special indeed. The music is played with passion, and conviction by a group of musicians of the calibre to get right inside the music and to express its astonishing character and sincerity. This is a major new contribution to the music of our time and I hope to God that someone – ECM? WDR?? BBC??? – records it.

This torrent of beautiful melody, this acceleration in creativity reminded me of the the surge in work-rate which Picasso went through, producing several works a day in 1968-1971. Or of the last four years (1893-7) and nine opus numbers (114-122) of Brahms, the period after he’d told his publisher he was packing it in. Who knows where these late flowerings in a creative life come from. They are miracles.

As John Fordham explains in an excellent profile (link below), Wheeler has always avoided, maybe even feared, the limelight. He says he likes “writing sad tunes, and then letting wonderful musicians destroy them.” Wheeler’s reticence, his total aversion to self-advertisement acts as a barrier to his visibility, but this is music which is strong, stands on its own merits, and will last.

“Sad tunes.” It’s a typically diversionary expression. Wheeler’s melodies simply flow and flow, and have astonishing optimism and uplift. The tune “4,5,6” for example – Wheeler’s playful approach to titles is similar to Howard Hodgkin’s- is irresistible in its joy and delight. Michel Legrand would have wished he’d written it. The organizers of the 2012 London Olympics will inevitably choose music less inspired and characterful than these works from one of the world’s major composers – who happens to live at the heart of one of the Olympic boroughs.

Only one of the big band works had previously been played: Enowena was commissioned by the far-sighted Lucas Schmid of WDR in Cologne. Another was a delicious re-working of the standard I Didn’t Know What Time it Was, playful essay in rhythmic instability, but with sumptuous chordal writing, particularly for the trombones. The Long Waiting was a feature for Ray Warleigh, whose warm, mellifluous and thoughtful playing was worth the price of the ticket on its own.

Kenny Wheeler himself played a number of solos, that familiar sound was stronger, and the man himself looked less frail than he had done in January. Evan Parker, Stan Sulzmann and Julian Arguelles were stand-out soloists among many, each with a story to tell. Vocalist Diana Torto was at her best in Comba No 3, which suited her agile and expressive voice completely.

The rhythm section players have all been regular collaborators of Wheeler’s and have a deep understanding of how his music works. They know exactly how to add punctuation to the eloquence and sheen of melodic line. Chris Laurence on bass carries through ostinato figures with total conviction and presence. The faultless Martin France has an uncanny ear for playing at exactly the right level. John Parricelli often stays hidden as an important part of the texture, but last night really shone in his solos too.

But above all John Taylor is masterful in every context. What I found particularly to enjoy last night was his way with linking passages. He has an ability to give the listener the slip, to side-step you completely, suddenly to be in new mood and feel territory- before you even know he’s left the old one. Just stunning.

Wheeler has had a number of different people in recent years who have worked tirelessly to promote the cause of his music. This tour is promoted by SoundUK and managed by Andrea Marini, with fabulously clear musical direction from the ever-astounding Pete Churchill.

The tour still has five more dates to go, listed below. The strongest feeling I have is that the arrival of this music is cause for celebration. I was lucky to be at its first public performance, and will find any excuse I can to hear it again and again.

Prior to the big band works were three of Wheeler’s most-played tunes, including Everybody’s Song but My Own. I can’t get the first sung words from the stage out of my head: “Every day I hear a melody,” from J. White’s lyric to the song has real resonance and could even serve as a motto for the tour.

Wheeler demonstrates that he is indeed one of the great melodists of our time.