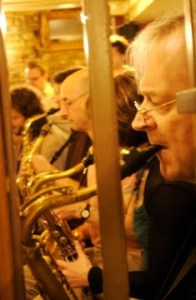 Who knows why this gig at the Vortex, during the London Jazz Festival, didn’t make it into the festival programme. Whatever. If the London Jazz Orchestra ‘s appearance at the Vortex on Sunday afternoon didn’t demand attention, it certainly deserved it. Mainly because the main work being played, Kenny Wheeler’s “Long Suite 2005” is music of a significance, and of a value as great and as lasting as anything else which has been played in the past ten days.

There was some talk of anniversaries at the gig: not just Kenny Wheeler’s 80th birthday in January of this year, but also 20 years of the “new” London Jazz Orchestra” (it also existed in the 1960’s) due be celebrated next year.

The LJO is a band of top-flight professionals, totally committed to the music it presents and plays. Musicans in their day-to-day lives have to strike a balance, to juggle between the need to earn money and the deep compulsion to perform music of the highest quality at the highest level. And all the points in between. The LJO is at the the quality-plus-commitment end of that particular spectrum. One player had got in a car at the crack of dawn in Sunderland in order to play this rehearsal and gig. It’s similar to the motivation of the classical players who respond to Claudio Abbado’s call to perform in his Lucerne Festival Orchestra.

Conductor Scott Stroman explained to the Vortex audience that LJO has always had the feel of a “band writing its own music” The first half contained interesting charts by Pete Hurt, Henry Lowther and Pete Saberton. “Bill’s Canadian Snowmobile” ended the first set on a high.

“Long Suite 2005,” a continuous, through-composed piece which twists and turns. Under the sheen of a beautiful melodic line there are fascinating shifting harmonies It just bursts with melodic invention.

Kenny Wheeler was a founder member of the orchestra. What was fascinating about this gig was to hear the music start to move away from him. Music of this quality will inevitably start to develop its own life away from the original dedicatees. The vocal part was performed with limpid grace and impassioned flawless precision by Brigitte Beraha. The Kenny Wheeler flugelhorn part was played by Henry Lowther, whose every phrase tells a story. Among others, Martin Speake on alto saxophone and Phil Lee on guitar took their solos with grace and conviction. Among the younger players, bassist Dave Manington and trumpeters Robbie Robson and Yazmin Ahmed caught the ear.

As someone who listens to a lot of music for the first time, I have a scale of responses. And the only response I can conceivably think of to this music is that I hope it gets performed, again, soon. And that I will be there, again, when that happens.