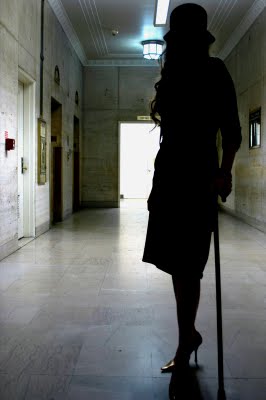 After the warm informal inclusiveness of the opening act (Luisa Sobral), Melody Gardot initially suggested an enigmatic, unapproachable figure. She was strikingly dressed, like a combination of Cruella De Vil and Norma Desmond (film noir siren from Sunset Boulevard). But as the evening progressed, it rapidly became clear that no Dalmatians would be abducted, and no screenwriters shot — quite the contrary — and that there was vastly more to Melody Gardot than meets the eye.

She’s first revealed to us on stage under eerie purple lights, singing a pulsing plantation chant, like something from the very primal font of the blues, accompanied only by some bells on her wrist and a stamping foot. It’s a bravura opening. Then the band comes alive behind her to tumultuous applause. Now Melody Gardot sits at the piano and plays thunderous chords as Irwin Hall wails on the sax. It all seems to promise an evening of moody soundscapes. She sings The Rain, first of an evening of originals — with a handful of superlative covers, mostly thrown in during the two encores demanded by an ecstatic audience.

The Rain is a striking, moody piece written by Melody Gardot and Jesse Harris. As she sings it and plays the piano Gardot transforms. From the gargantuan diva promised by that explosive opening, she subsumes herself into her band. Her expert playing makes her a cog in a magnificent machine. While Irwin Hall continues to distinguish himself on the saxophone, guitarist Mitchell Long is playing fat, plangent chords. Sitting at her piano in the shadows, Gardot provides a driving rhythm, scatting as she plays.

Goodbye is another original from the new album. For this percussionist Bryan Brock emerges from behind his drum kit to play, yes, the washboard. Stephan Braun plucks angular sonorities from the upright bass. Irwin Hall offers a searing wail on the clarinet. There is a theatricality to the proceedings now that suggest a Weimar Tom Waits. Sort of Weil and Brecht meets Leiber and Stoller.

But Melody Gardot is a musical chameleon and the gig transforms once again. No longer hunched at the piano in the shadows, she now stands centre stage at the microphone. And she sings. It’s like an African tribal ululation segueing into a sultry love song. Her vocal range and control is amazing. Then another transformation. It’s now ass-swinging and Latin. There is a beautiful flute interjection from Irwin Hall.

Opening up to the audience now, Gardot confides that it’s so cold outside in the November London night, she thought she’d warm us up with a little touch of Brazil. We’re warmer, all right, and so is she. Warm and funny. An inviting, intimate and friendly presence commanding the stage and the entire hall. Like virtually every man in the audience I will feel a surge of jealousy when, during the encore, she gifts a kiss on a greybeard in the front row.

But right now the whole Barbican is clapping along to Mira. Just a few songs ago Melody Gardot was an enigma in the shadows. Now she’s lovely and engaging. And funny. A beguiling presence. As she sings about Paris, drummer and musical director Chuck Staab provides immaculate, stirring percussion. Now Irwin Hall comes centre stage cradling two saxophones, and plays them both at once, to spectacular and explosive effect. Meanwhile Gardot sings in fluent French. Irwin Hall withdraws to the side of the stage and surrenders his two saxophones for a klezmer clarinet. Benny Goodman would be proud. Stephan Braun swaps the upright bass for the cello, which he plays with equal ease.

Melody Gardot is a mischievous and inventive mimic, with considerable wit. Then she moves from warmth and humour to delivering a great broken hearted love song. It has a magnificent, modernist complexity. Like a post apocalypse Edith Piaf. And then Bryan Brock kicks out on the percussion and it’s seething and swaying and turning into a flamenco. With hand claps, foot taps and Spanish guitar from Mitchell Long.

Then the music segues into a gentle bossa nova for the 21st Century. Warm waves rolling onto the beach of a brave new world. This is a constantly surprising, gently mind-blowing show. The singer returns to the piano. She is no mean pianist. The song concludes in a perfect gesture — a kiss blown to the audience. She then commences My One and Only Thrill, a haunting love song. And I am beginning to realise that the abbreviation ‘MG’ I keep jotting down in my notes also stands for musical genius.

Two warm, storming encores set the seal on an unforgettable evening. The first involves the whole band and brilliantly interpolates the smouldering Peggy Lee classic Fever into the measured heat of Gershwin’s Summertime. For the final encore we get an affecting performance of Somewhere Over the Rainbow. This consists of just Melody Gardot singing and Stephan Braun playing the cello. Except he’s playing it like a guitar. What a fantastic evening. They were selling copies of Gardot’s new album The Absence on the way in. They even had it on vinyl. I’m kicking myself for not having bought one. I could be playing it now.