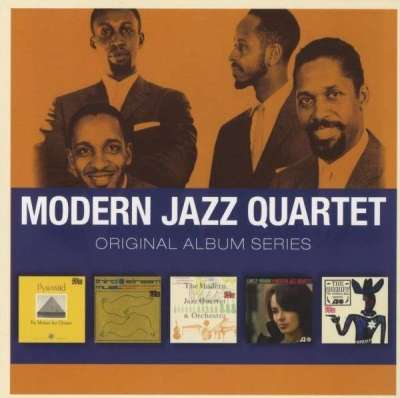 ‘…all that Bach stuff.’ Modern Jazz Quartet vibes-player Milt Jackson often complained about having to play the band’s distinctive jazz counterpoint, according to their bassist, Percy Heath. In this 5-CD mid-period box set, the chord sequences and cadences are often Bach-like, but the improvising is pure bebop: Lewis and Jackson met in Dizzy Gillespie’s big band, drummer Connie Kay worked with Miles and Lester Young, and Heath with Charlie Parker.

It’s simplistic to call Jackson the band’s heart and pianist John Lewis the band’s head, but the two distinctive voices balance each other perfectly. Most of the compositions and arrangements in these recordings are by Lewis, and they have an almost geometric form. Pyramid, the title track of the 1960 album, is a ‘tempo pyramid’: fast to slow to fast. Inspired by a Mahalia Jackson performance, there’s a lot of gospel and blues here in the warm vibes and cool piano’s call and response, with Kay’s effervescent drums and Heath’s warm swinging tone. Some of the MJQ’s tunes have become standards. Heath: ‘If we didn’t play Django in a concert…we risked getting stoned. I mean in the thrown-at sense.’ This version has rustling brush sounds behind Jackson’s endlessly inventive soloing, with its slow-oscillating charm and sharp phrasing. Lewis’ arrangements of How High the Moon and It Don’t Mean a Thing are like miniature big band charts, (Lewis was influenced by Basie and Ellington) the piano playing precise swing riffs behind Jackson’s exuberant solos. Time expands in the attention to detail, as the quartet play together in various permutations, with subito changes of texture.

Ornette Coleman’s tune Lonely Woman gives the title to the 1962 album, but the MJQ turns the original’s playful anarchy into something cool and poised. Coleman’s urgent thrum becomes strong swing. New York 19 has arco bass interleaved with the melody, and a superb piano solo recalling Art Tatum, but less flamboyant. Lewis originally wrote Animal Dance, Lamb Leopard and Fugato for symphony orchestra- they’re beautifully re-enacted here by the Quartet. Trieste, with its tango/bolero groove and temple bells is the only variation from the two albums’ bright swing.

The Sheriff (1964) is the other quartet recording, the arrangements if possible even tighter. In Lewis’ In a Crowd and the standard Mean to Me, the vibes are on fire over the powerful swing and scampering rhythmic breaks. Jackson plays the melodies so imaginatively and joyfully you can almost hear him smile. Some variants on the swing: Lewis’ Natural Affection could be by Jobim, with delicate bossa grooves from Kay. The upbeat reading of Villa Lobos’ Bachianas Brasileiras keeps the original’s tango feel, and Bonfá’s Carnival has the piano comping with percussive precision behind Jackson’s unusually straight quavers.

The Modern Jazz Quartet and Orchestra (1960). Musicologist and composer Gunther Schuller wrote his three-part Concertino for Jazz Quartet and Orchestra to unite ‘…the sounds and feelings of jazz with…contemporary symphonic music.’ The Bernstein-esque dissonant blues scale harmonies bring out a darker, haunting side to the MJQ, as they improvise in response to the (unnamed) orchestra. Motifs run from flute to dark bass, to harp and swirling strings, in film noir flourishes. It still sounds highly original. There’s even a rare bass solo! In Hodeir’s Messaien-influenced Around the Blues, and Heider’s Divertimento, the jazz and classical writing is less integrated- at times it’s as if the MJQ and orchestra are trading 8s rather than playing together. All the composers seem to use swing as the characteristic jazz rhythm.

This box set is a snapshot of five of the MJQ’s forty-plus years together. They have Classical equilibrium, and solos at the service of the ensemble- unlike the heady individualistic Romantic pull of the Bebop soloists. Like Bach, the MJQ are both reassuring and exhilarating.