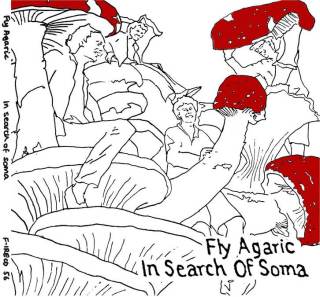 Although this is the band’s first release under the name Fly Agaric, its members – reedsman/flautist/accordionist Zac Gvi, pianist/accordionist Francesc Marco, bassist Jiri Slavik and drummer/pianist Fred Thomas – will already be familiar to followers of the London jazz scene for their work with the likes of Oren Marshall, the Magic Lantern and Timeline.

In Search of Soma, like much of the F-IRE Collective’s work, views the musical world as a smorgasbord, combining snatches of blues, waltzes, free (and structured) jazz -etc. to form a restless, constantly shifting soundscape that – appropriately enough, given the psychedelic references in the band’s name and album title – is often frenetic, edgy and kaleidoscopic, but can also be serene, mellow and meditative.

Chattering percussive effects, honking rumbustiousness, roiling fervour jostle promiscuously with (deceptive) calm and -– on one track – the voice (from a speech on employment) of Nicolas Sarkozy to make up a fascinating set of multi-hued pieces, all delivered with extraordinary panache and assurance by a band that is clearly as open-eyed (song titles’ sources include everything from the Inspector Clouseau films of Blake Edwards to the poignantly humorous, sting-in-the-tail work of Jiri Menzel, but also include political references such as ‘Ramallah’) as it is open-eared.

‘An adventure in sound and performance’ is promised in the band’s publicity material, and that’s exactly what the quartet delivers on this powerful, eloquent album.