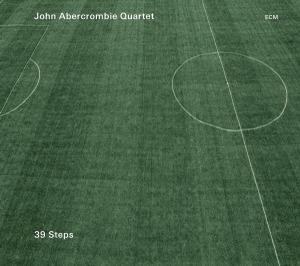 Although US guitarist John Abercrombie has appeared on over 50 ECM albums, both as leader and sideman for the likes of Charles Lloyd, Jan Garbarek, Enrico Rava and Kenny Wheeler, his pianist here, Marc Copland, has not recorded for the label before. Their musical approaches, however, are supremely compatible, Copland remarking: ‘If I played guitar I would want to sound like him. We’re both into listening, approaching harmonies in a certain way, playing lyrically as well as swinging …’

This last phrase perfectly describes the music on 39 Steps, seven Abercrombie compositions, two by Copland, a collective improvisation (which continues the Hitchcock theme by being entitled ‘Shadow of a Doubt’) and an intriguing closer, a caught-in-a-strobe-light deconstruction of the Burnett/Norton classic ‘Melancholy Baby’.

Underpinning, embellishing and occasionally driving the thoughtful yet always powerful playing of Copland and Abercrombie is one of the subtlest, most musicianly rhythm sections in the music: bassist Drew Gress and drummer Joey Baron. The latter pulls off small miracles of delicacy and touch throughout, making his cymbals ‘breathe’ under Abercrombie’s deft contributions to his own gently insistent themes ‘Another Ralph’s’ and ‘39 Steps’, or crackling assertively under Copland’s more urgent ‘LST’, and Gress – as ever – is the band’s indispensable rudder.

Both Abercrombie and Copland are unhurried, thoughtful players, their solos impeccably tasteful but surprisingly robust, and the entire album simply exudes class, elegance and assurance – a flawless recording from four masters of the craft at the top of their game.