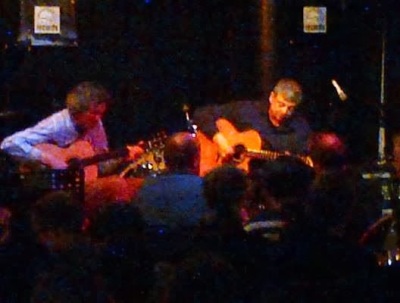 “I have worked quite a bit on phrasing,” guitarist said Philip Catherine earlier this year, with extreme modesty, in an interview, “drawing inspiration from players who phrase amazingly well, and with whom you hear everything. That’s what interests me more than being ‘lyrical’.”

The British-born, Belgian-based guitarist’s phrasing and melodic sense were a revelation, his duet set with John Etheridge at the Vortex on Saturday night was an inspiration, and certainly – for me – this was a highlight of the London Jazz Festival.

The two guitarists have met frequently over the years, but had never, until Saturday night, performed as a duo. The ease and the speed with which their collaboration bore fruit were astounding. They made instant counterpoint and instant joy. Both players are open, collaborative by nature, their civilized conversation, often at the boundaries of silence, held the audience spellbound.

They played a series of standards, starting with Freddie Freeloader, and finishing with My Foolish Hear. Etheridge did all the spoken introductions, Catherine’s verbal interjections were almost non-existent. He would give the occasional clever steer like “and now together”, and once let out and an exclaimed, emphatic “You must be kidding!” when Etheridge broke into song, and by implication suggested that Catherine might accept the invitation to join in and sing too.

This duo set was the third part of an evening at the Vortex celebrating the 35th birthday of  the Igloo record label, with its studios in Etterbeek in Brussels run by Daniel Léon. The label’s biggest seller was an album by Philip Catherine with Chet Baker. The evening was also supported by the Luxembourg export bureau ‘music LX’.

Working backwards, the second set gave rise to an accidental premiere. Saxophonist Sylvain Rifflet had been due to perform a duet with vibraphonist Pascal Schumacher, but ended up playing a solo set for the first time in his life. With impossibly fast arpeggios, circular breathing, slap tonguing, but also a strong sense of structure and line he gave a set which traversed compositions of his own and a tune by Moondog, a performance with a rock-solid pulse and an acute sense of line. He has spent several months in primary schools in the poorer Paris suburbs teaching choirs to sing Moondog in English. This was a different kind of challenge, which he rose to superbly.

The first set was given by the trio of one of the youngest musicians around, the 23-year old pianist from Liège pianist/composer Igor Gehenot, whose debut album Road Story (Igloo) has been very well received, and whose huge promise is definitely attracting the attention of larger labels (one wasthere on Saturday). He has a superb bassist and drummer in Sam Gerstmans and Teun Verbruggen respectively. Gerstmans had a lot of repeated, motoric figures to play, but they came acrosss with subtlety and shape every time. I was seated about 60cm from the ride cymbal and therefore appreciated very much indeed Teun Verbruggen’s amazing delicacy and control (Hartelijke Dank!)

A statistical analysis of the media coverage of the LJF will probably show a huge (any other adjectives come to mind?)  bias in favour of the American visitors to the festival. This evening showed the jazz strengths of a much travelled-through, overflown, joked-about corner of Europe right on our doorstep. The duo set was a very special occasion indeed. Away from the limelight, this triple bill taken all together added up to a very special night of the LJF.