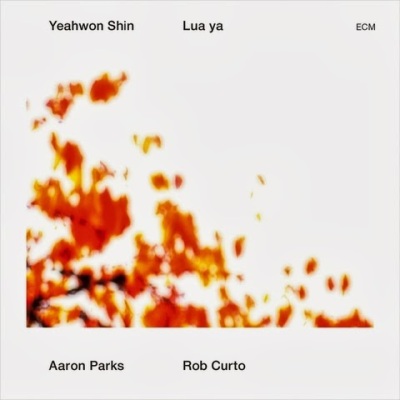 South Korean vocalist Yeahwon Shin resides in New York, and the starting point of this recording project, a collaboration with pianist Aaron Parks and accordionist Rob Curto, came from her visit to a recording session for Parks’ solo album, ‘Arborescence’, in Massachusetts.

There and then – unplanned, unrehearsed and completely improvised – Yeahwon Shin and Aaron Parks began to experiment with voice and piano in the reverberant acoustic of Mechanics Hall, Worcester. As recalled by Shin: “There was no talking… we just smiled as if to say, ‘Let’s flow in the energy of the moment and see what happens.’ I closed my eyes, and after a few seconds, a melody from my childhood flowed out. There was an instant improvisational connection.” And so it was decided to return a few months later, along with accordionist Rob Curto, to develop and record what has resulted in these remarkable, spacial interpretations of recalled Korean lullabies and songs which, on the arrival of her own daughter (Lua), the singer dedicates to “mothers and children everywhere’.

Yeahwon Shin’s subtle vocals possess an endearing range of timbres, colours and percussive techniques – always sensitive and warm; often bright with a gentle vibrato; but then also displaying a charming, breathy, childlike innocence. The connection here between pianist and vocalist is something special, the magic further woven by the blurring of written and improvised material – indeed, much of the recorded performance emanates simply from quotation beforehand of these traditional melodies. Shin has me hanging on her every (Korean) word and phrase; Parks’ limpid, restrained, solo touch and chordal shifts are seriously spellbinding; and augmenting both on a good number of the thirteen tracks is the delicate, intuitive accordion of Rob Curto (Shin and Curto share a deep affinity for Brazilian music and have worked together previously).

The entire sequence is well balanced (pin-sharp ECM recording and mixing, as always), the wonder of the whole experience gradually unfolding throughout its forty minutes – and it almost seems superfluous to describe, in any great detail, the intrinsic beauty to be found here (it really does have to be experienced!). The opening Lullaby, with homely accordion, gently rocking piano and hushed, motherly tones is an exquisite miniature which introduces the album’s intent, as does the perfectly-shaped, folksong-like Moving Clouds which follows. The Moonwatcher And The Child is fascinating in both its mystery and extraneous, percussive accordion effects; and the tiny, nursery rhyme-sounding Remembrance is utterly delightful. Parks’ luscious piano chords in Beads Of Rain (with a hint of the Dvorak ‘New World’ Symphony) match Yeahwon’s raindrop voice so perfectly, both elegantly illuminating its title (and the later variation finds Curto partnering Shin, offering both sustained hymnal- and dance-like qualities).

‘Yeahwon,’ translated, is ‘beautiful art’. With this ECM debut for all three musicians, it could also constitute the perfect description for this creative coming-together. An absorbing and original release to be fervently recommended.