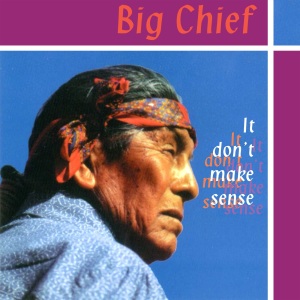 Big Chief is a London-based blues/jazz/soul band that started life in 1976. Over the years, the group has collaborated with a multitude of big names including Ray Warleigh, Harry Beckett and Henry Lowther, and taped at least five albums.

A major selling-point of this download-only reissue of their first recording, It Don’t Make Sense, is the presence of Dick-Heckstall-Smith, the great saxophone player who worked with legends including Alexis Korner, the Graham Bond Organisation, John Mayall and Colosseum. The package is made more attractive by the addition of two previously unheard live tracks from the early ‘80s (the date of the studio session is not given, although it’s probably 1997).

Three of Big Chief’s founders – John Fry (vocals, saxophones), Adrian Paton (keyboards, backing vocals) and Tony Edwards (drums, percussion) – form the backbone of the group, and they remain members to this day. Bass stalwart Tony Reeves – on board since 1979 – and Mike Jacques on guitar (and mandolin) are present throughout. The other participants vary: several tracks have Chris Fry on trombone, and Dave Chambers on alto sax/flute. When Edwards vacates the drum chair, his place is taken by either Gary O’Toole or John Dillon.

The set starts with Breakin’ Up Somebody’s Home. Immediately, Heckstall-Smith’s presence is felt with a swirling solo, and his two-saxes-at-once party-piece is aired on the shuffling Rock Awhile by Billy Nightingale. The title track – by Chicago bluesman Willie Dixon – is suitably slow and sensitive; the lyrics reflect that man can travel to the moon and keep a submarine submerged for weeks, but can’t make peace. J.J. Cale’s classic After Midnight may be less profound, but it’s performed equally well and features terrific sax from John Fry.

The vocal harmonies on It Keeps Rainin’, Work, Work, Work and Big Chief sound dated, but the songs are redeemed by skillful arrangements and excellent horn solos. All of the vocal tracks are delivered with an American accent, which is odd because Big Chief is an unpretentious, feel-good band that makes no claim for blues authenticity.

In the main, the instrumental pieces are more satisfying. Joe Sample’s Hots It is distinguished by sparkling keyboards and the saxophones of Heckstall-Smith and John Fry. Flacka, by Dave Chambers, is the only composition here by a member of Big Chief and it has an attractive township slant. There are two jazz standards: Song For My Father, which contains a smooth piano interlude and fine bass work, and a surprising, acoustic guitar-led Mood Indigo.

Heckstall-Smith’s distinctive tone makes a huge difference to the group’s texture. His incisive, beefy solos take the music to another level, but he appears on only five tunes including the additional tracks. The live takes of Big Chief and I Wish I Knew How It Would Feel To Be Free are an exciting discovery, and worthy of inclusion despite their rather rough sound quality.

It Don’t Make Sense will be available to download from 10 March on Amazon, iTunes, Google Play etc.
Another album of previously-unheard Big Chief with Heckstall-Smith is to be released in September 2014, to mark what would have been the saxophonist’s 80th birthday.