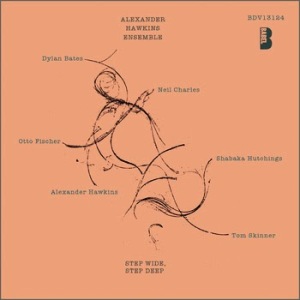 For those who favour the directness of clean-cut tonality, the sound world of this ensemble may make some demands – yet an ability to delve beyond its initial perceived randomness, through repeated exploration, definitely brings rewards. There’s a tangible sense of discovery here, as familiar melodic structure pales into the distance, enabling a different scope of listening – that’s the key. The mainly extended pieces provide the players with the spatial freedom to spark and develop ideas, and it’s fascinating to try to discern a distinction between composition and extemporisation… and then ultimately drop that constraint, and to yield to its musical totality.

Step Wide, Step Deep / Space of Time Danced Thru immediately swings into action, straining at the leash. It’s an enthralling twelve-minute arena in which the ensemble members flex their individual muscles; yet there is cohesion here, Hawkins and others seemingly quoting (albeit subtly) from the deconstructed A Train of his solo piano album. The freedom is palpable, all six players appearing to simultaneously accept and shun the spotlight (though perhaps the audio experience alone can illuminate that observation).

Comparatively diminutive, Forgiven Only Words Once is more unsettled, though the dynamic gear changes of piano and guitar in particular, and the varied violin percussiveness that Dylan Bates contributes, make a powerful statement. Meanwhile, back at another expansive colorfield canvas, MO (-Ittoqqortoormiit) – go on, Google the location – relentlessly rumbles and tumbles to the ringleader’s abrupt yet agile piano leaps, drummer Tom Skinner giving all he’s got to raise the agreeably cacophonic busyness of it all before unanimity is achieved (apart from violinist Bates who is happy to showboat).

The progression of Listen/Glow is compelling. From a tentative awakening, Shabaka Hutchings’ clarinet and Neil Charles’ arco bass begin to prance vivaciously, almost trying to out-impress each other with their respective fiery dances – and their attentive, encircling colleagues only encourage the persistent display (maybe, with such visualisation, the titling becomes clear). Advice is a smile-inducing quartet arrangement of the piano track to be found on Song Singular, an affable Deep Southern blues which, although tempting to wish it to hang around for longer, is perfectly formed.

To close, Assemble/Melancholy does well to pull itself from its collective mire and build upwards – but wait… a hidden track… and a beautiful one at that. For seven whole minutes, in Baobab Constellation, the sextet improvises serenely around a delicate three-note violin motto – and, weightless and free, equilibrium is found.