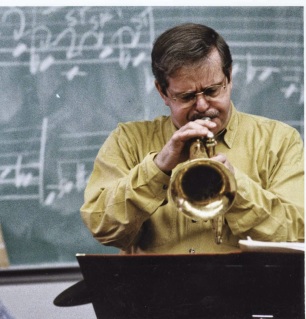 In January 1990, Kenny Wheeler was about to set out on a tour to play the material from Music for Large and Small Ensembles, certainly among his masterpieces, and arguably one of the essential and most influential jazz albums of the past half-century. Chris Parker’s interview, from one of the creative high points of Kenny Wheeler’s career, captures well his kindness about colleagues and his clarity of judgement, and appears here in its entirety for the first time.

Chris Parker: You started in the UK with Vic Lewis and Roy Fox?

CP: Was it difficult to combine personal jazz satisfaction with commerciality?

KW: Some bands were a lot more commercial than others. The Heath band and the Dankworth band were a little more jazzy than others – though the Heath band was also fairly commercial – but even with Roy Fox he had tunes where people could play jazz solos on standards and somehow get away with it.

CP: Was there any pressure to play the same solos every night?

KW: Maybe I did without knowing it, but I was never asked to do it.

CP: Did you come across much of the internecine warfare that raged then, between the boppers and the traditionalists?

KW: No, but I never mixed with the other scenes. I was always in what they called the modern jazz scene. I think it was something the press liked to stir up to keep things going.

CP: Dankworth: a lot of the criticism of him is based around the fact that he got work by allying jazz, rather arbitrarily, with other art forms to make it respectable …

KW: It does help to have some sort of literary thing put on, rather than just calling the songs Joe or John or Jane, or whatever. It makes the public take a little more notice.

CP: Were you inspired, for Windmill Tilter, by Cervantes?

KW: The world’s greatest losers are some of my favourite people and I wanted to do something about that, but I had a talk with Dankworth and he put me off a bit. He mentioned some names, and Don Quixote caught my attention. I went to the local library and met a lady there who was very helpful, and the more I read, the more I liked him, but I wasn’t sure if it was a great idea because I think Richard Strauss has done something … Dave Holland and John McLaughlin were both on it, very early in their careers, before they left for the States.

CP: Then there was Ronnie Scott, Tubby Hayes etc.?

KW: Ronnie had a great band, but it was probably too much – his nine-piece aggravation, he called it. It had two drummers, Tony Oxley and Tony Crombie, plus John Surman, Chris Pyne, Ray Warleigh. I thought it was fabulous – just bursting to get the music going – but Ronnie wanted it more straightahead (fair enough: it was his band), so it just petered out, though I enjoyed that band a lot. Joe Henderson was writing for it, and I wrote a couple of things.

CP: Was writing always a part of your life?

KW: I started early. I wrote a couple of things for Dankworth before the album.

CP: Then the free improvisation with John Stevens etc.: has that branch of the music always interested you?

KW: The Little Theatre Club was going. I wasn’t a great bebopper, although that was my roots; I never could really play it and there were great people around who could: Tubby Hayes, Jimmy Deuchar. But I was determined, I wanted to play with somebody, and I heard about the Little Theatre Club, so I went up there one night and listened and hated it very much! After a few nights, I was asked to sit in and I did. It was like therapy for me; I just went berserk and from then on I was kind of a little bit hooked on it.

CP: Do you think it’s fair comment that freely improvised music looks a lot more fun to play than to listen to?

KW: That’s because of people like Han Bennink and Misha Mengelberg, but it was always pretty serious to me, with the English and German lot. It depends on who you play it with – I never enjoyed trying to play with everybody, but there’s always a few who last: Evan Parker etc.

KW: I like his music very much. I did a Birmingham gig with him recently.

KW: 1974-–76 with Braxton – a great quartet with Dave Holland and Barry Altschul. I’d like to play with Anthony again, but I don’t know if I could play his music: it was hard enough then; it’s probably harder now!

CP: Do you feel that the UK scene neglects your generation? Do you ever wish you were starting now with the scene as it is today?

KW: Probably not. I was confused and diffused when I started. I never thought seriously that I could become an actual jazz player until I was in my thirties – a late starter – though I’ve made my living on the trumpet from age 22 or 23. I was almost like a fan until I was 30. I’d always had trouble with the mechanics, the physical thing of the trumpet, I was never a naturally good trumpet player, but I had good conception. I wouldn’t say I am now a good trumpeter – it’s just one of those things that if you love it, you’re stuck with it for life and you’re lucky if you get better, but you never say: ‘Well, now I can play the trumpet.’ When I got into my thirties and started improving a little as a player I got a little more confident. If I’d been starting young, I would probably have gone straight to New York and got some lessons.

CP: Why did you come here rather than the US?

KW: It was the end of the Korean War and I would have probably been eligible to be drafted. I didn’t mind being drafted, but I thought, ‘Maybe they won’t put me in a band, maybe they’ll put me in the front line’, so I thought I’d go somewhere safe. I applied a year ago for dual nationality. I travel so much, and when I come back to the UK there’s always a huge line and I can’t go to the UK queue even though I’ve lived here for 35 years.

CP: What do you consider your favourite recording?

KW: In the last three or four years it’s loosened up a bit. At one time it used to be all Norma [Winstone] and I leaning heavily on John [Taylor] to do everything, almost – composing, being the complete rhythm section – but lately we’ve taken charge a bit between us and it can get quite violent and hot sometimes. We never work – I think because a lot of people think, ‘Wishy-washy ECM’, so we get one or two gigs a year. That’s a shame: this country’s missing something there, because it’s a terrific group.

CP: Do you think Europe’s more appreciative of jazz than the UK?

KW: Yes, I do think so. It may be because the Germans were forbidden to play jazz in the war – a lot of US players do most of their work there. I hardly work here – this tour [Music for Large and Small Ensembles, 1990] is a very special thing: I probably do only about 10 per cent of my work here in the UK, if that. I used to go to the US two or three times a year, but since that’s not happening … I teach once a year in western Canada, Alberta. The [Dave] Holland group had to stop for me because I could never get together with them and rehearse – US players play much more than we do, though the younger UK guys, I hear, do get together just to play. Before, it was: ‘We’ll get a gig and then we’ll have a rehearsal.’

CP: Have you had the chance to hear many of the young players here?

KW: I don’t get out much, but I have heard Iain Ballamy, Steve Argüelles, Steve Williamson …

CP: What do you think about the media attention being focused so much on young players?

KW: It’s nice, but they should maybe focus some attention on the old ones too. It all started with Wynton Marsalis’s cult of youth. They don’t ask me to play with them. I’m very impressed with Steve Williamson, but even younger people than me – Stan Sulzmann for instance – get no attention, play to ten people. Perhaps Courtney [Pine] and Andy [Sheppard] brought in a whole generation of people who were never into jazz before. It’s nice in a way, but I’d like to see Bobby Wellins etc. get more recognition.

CP: Do you feel jazz-rock was a fertile area?

KW: The way Mike Gibbs does it, yes. I love his music. As a horn player, you’ve got all that stuff going on in the rhythm section behind you and it takes away your exposure – with a trio, playing standards, you’re exposed. But it’s not generally for me. The United Jazz and Rock Ensemble plays to big audiences – it’s a good, commercial band.

CP: What do you think of the state of the music now? Has anything really happened since Ornette?

KW: I suppose that’s what it needs: some new Messiah to come along. Maybe Steve Coleman. He has a big following among the young black players – it’s not something that hits you immediately as ‘new’, but maybe it takes a while to get in to. Some of the tunes I write, with their harmonies, would sound sweet and nice with synthesisers, but I still like to go back to the old acoustic thing.

KW: John Abercrombie, Pete Erskine, Dave Holland, John Taylor. It’s not based around the quintet, doesn’t heavily feature it. Eight brass, five saxes and Norma, with Hugh Fraser on trombone. We’ve got two days to rehearse, all my compositions. I got an Arts Council grant.

CP: What are your plans afterwards?

KW: Definitely not to be a bandleader for a long time! If you could just write the music and play it, it’d be OK, but there’s so much else involved. I’ll usually get letters, calls – I’m not the hustling type, but I keep working.

CP: What would you do with unlimited resources?

KW: I’d like to write and maybe take a quartet out in England, but there’s a problem: unless you have a ‘big name’, people don’t come out to see you. I like quartets – John Taylor’s my favourite pianist, and Chris Laurence and John Marshall would suit me, possibly augmented by Julian Argüelles, who’s in the new band. 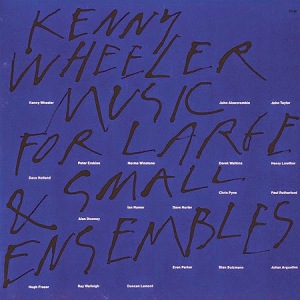