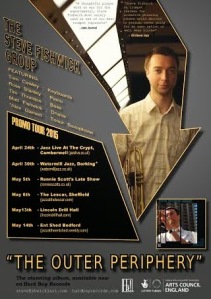 Trumpeter STEVE FISHWICK will be touring to six venues around the UK with his band playing material from his new CD “The Outer Periphery. ” He write:

I’m excited to be touring in the spring to promote my new CD The Outer Periphery. In fact, this CD was recorded in 2011 but had been put on the back burner whilst I was working with a sextet featuring Frank Basile and Osian Roberts (MORE ABOUT THAT PROJECT HERE) . I’m very pleased, thanks to Arts Council England, to finally be able to present this music live at six venues throughout the UK.

The inspiration for this music was sparked initially by my brother Matt, who plays drums on the CD. Being twins and growing up together we’ve always influenced each other musically, but when he returned to London after five years of living in New York there was a dramatic change in his playing. Matt has always been a very serious and studious musician but his time in New York had seemingly solidified the many styles he had studied over the years: he could now seemingly change effortlessly between these styles (Max Roach, Roy Haynes, Louis Hayes, Philly Joe Jones, Elvin Jones, Art Blakey, Billy Higgins and many more). However the most striking thing to me was the contemporary element of his playing. He had assimilated a whole raft of more modern influences such as Al Foster, post Miles Tony Williams, Billy Drummond, Ari Hoenig and Bill Stewart into a homogenous style. It was apparent the he was developing his own style and sound and it was beautiful to watch.

Hearing this dramatic development in Matt’s playing made me realise that although I listened to a wide variety of music, I hadn’t yet managed to work these influences into my music and ultimately hadn’t developed an original, personal style. So began a long (and ongoing) period of practice, experimentation and reflection. I started revisiting a lot of music I used to listen to back in my college days as well as discovering and studying a lot of contemporary jazz and some classical music too. I had always practised a lot in the past but now I began the long road of trying to develop a new individual language: inventing my own exercises in the practice room and developing my own systems for improvisation rather than solely studying the greats off records as I had done in the past. It was an exciting, sometimes painful, but very productive period for me. I wrote most of the tunes for this CD in a short space of time in addition to some that appear on our last sextet CD When Night Falls and our yet to be released sextet CD In The Empire State (recorded in NYC last September). For me the writing process is usually quite painful and takes a very long time so it was unusual that I managed to get so many tunes together that I was happy with in such a short period.

This group has a somewhat unusual instrumentation in the fact that it has two keyboard instruments, providing a certain harmonic density I was hearing whilst writing this music. Ross Stanley plays piano and Tom Cawley plays Fender Rhodes. This could easily be a disaster in the wrong hands, but as well as being incredible pianists, Tom and Ross have some of the best ears in the business. This coupled with their unparalleled taste and musicality make this line up joy to work with.

On bass we have Tim Thornton who has established himself in a short space of time as one of the most in demand bass players in the UK after leaving Birmingham Conservatoire around four or five years ago. His big sound, great feel and open mindedness combined with interest in the tradition (rare in someone so young) make him the ideal bassist for the group.

We have a special guest in the form of Alex Garnett, playing tenor saxophone. He has always been one of my favourite players and has really come into his own in the past few years having also developed a highly personal style that is very contemporary, yet deeply rooted in the history of jazz through years of studying the masters. He contributes some great solos on three tracks on the CD and I’m very pleased that he will be joining us on the Watermill Jazz gig in Dorking on the 30th April.