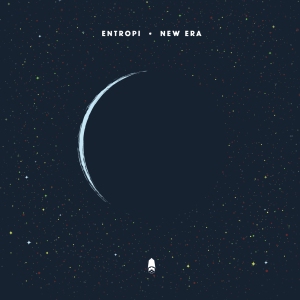 Announced by deep-space sleeve art and track listing, the crew of the Entropi head towards a galactic destination – and phasers are most emphatically set to stun. For debut album New Era, saxophonist and composer Dee Byrne’s quintet explore group improvisation in the context of “notions of chance and fate, our relationship with space and the cosmos and the unpredictable and insecure nature of existence.”

Byrne holds an impressive CV, including a Masters in Jazz Performance from Trinity Laban and has a veritable ‘solar system’ of projects on the go, including the popular LUME nights of improvised music at London’s Long White Cloud and Vortex venues. The saxophonist’s companions here are familiar names on the British jazz scene – Andre Canniere (trumpet), Rebecca Nash (piano), Olie Brice (double bass) and Matt Fisher (drums).

The macrocosmic concept of ‘order and chaos’ (translated musically as ‘organisation and spontaneity’) is key to Entropi’s success, as revealed in title track New Era which, though heralded by nebulous sax-and-trumpet forays, actually widens into the most accessible, breezy, Herbie Hancock-style outing full of double-horn licks and eloquent solos over a compelling Rhodes-led groove. The quintet’s front line partnership is strong – Canniere seems particularly ‘at home’, as revealed in his bold, unfettered extemporisations in Mode for C (a track inspired by Coltrane’s Miles Mode); and although Byrne can be effortlessly lyrical, there’s also a constant sense of looming, edgy unpredictability in her delivery which frequently bursts into exciting, raucous alto outpourings.

In Flux is characterised by a memorable, syncopated, descending motif, as Byrne’s Getz-like elegance ventures into open piano, bass and drum atmospheres, whilst Canniere’s high, bell-like solo clarity is reminiscent of the great John Faddis. Throughout, pianist Rebecca Nash’s assertive block chords uphold the solidity of the quintet, but it’s her Rhodes prowess which provides the album’s pleasing ethereality (shades of Mike Ratledge or, currently, Arthur Lea) – and standout Orbit glints all the more brightly for it.

There’s a lot of interest and fine soloing/grooving in this album – and, aligned to Dee Byrne’s ethos of improvisation, it seems certain that new musical planets will be discovered as it is officially launched and toured. Let’s hope further missions are scheduled.