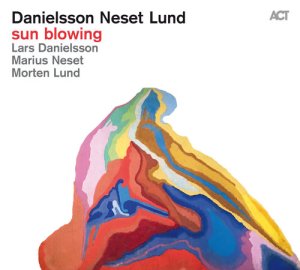 Three players come together, record a CD’s worth of music, and go their separate ways. A few of the thousands of recordings like this stand out. This is one of those.

It’s a Scandinavian collaboration. Swede Lars Danielsson on bass and Dane Morten Lund on drums knew each other’s playing well, and felt the Norwegian rising star Marius Neset was a kindred spirit. A saxophone trio, then, with Neset playing tenor throughout and delivering some of his most open and exploratory playing. Since this session, laid down two years ago, he’s released fully-realised quintet and large ensemble albums, but the freedom afforded by the single-horn- plus-rhythm setting also suits him beautifully. And it shows how a supremely talented young horn player effortlessly evokes elders: the opening bluesy shuffle Little Jump had discernible echoes for me of Joshua Redman on Back East. Up North has something of the feel of State of the Tenor-era Joe Henderson. Elsewhere there are strong hints of Garbarek and Brecker, and tracks that will please fans of Andy Sheppard’s Trio Libero.

It’s not an exercise in styles, though. Neset’s personality shines through, and he brings his wonderful tone and fine story-teller’s instincts to each tune – all by his cohorts save for one of his own and one (The Cost of Living) by Don Grolnick. There are intense moments and some solid grooves, energized by Danielsson’s compelling, deep bass sound, but the more contemplative side of recent Scandinavian jazz features strongly, too. One tune of Danielsson’s is actually titled Folksong but several others have a folkish tinge.

The full set, then, is much more than the amiable exploration of standards found in many single session encounters. However these tunes began, all the music feels as if it was written for this trio, and each of them plays their part in the beauty of the results. It is the saxophonist’s sound that stays with me, though, with a recurring sense of a single horn line following a sequence of ideas to somewhere unexpected. Still, creating a setting where that kind of productive thinking aloud is possible is a collective achievement. And together the three have turned a session which could easily never have taken place into music that sounds as if it needed to be made.

LINKS: Promotional video from ACT Music
Interview with Morten Lund – the story behind the album