The programming of Inntoene has definitely lived up to expectations on the first night, with all four acts, all bringing stage presence and infectious energy, capturing the affections of this loyal audience. The weather has not been co-operating at all, with biblical downpours on the way there (and thick mist to complicate the drive home), but these people are all habitués. They come out into the countryside prepared, dressed to defy the elements, equipped with heavy duty rainwear, boots, blankets, sleeping bags, all get brought into the concerts in the barn. But what they all share is a tendency to trust Paul Zauner’s programme choices, and a wish to enjoy the unique Inntoene experience.

As Kenny Werner‘s opening solo piano set got under way, they were still arriving. The garish anoraks of latecomers and the noise of their impedimenta being brought in were thoroughly distracting for the first few minutes, but once everyone was seated, Werner’s piano mastery took over. It drew the audience in more and more as the set progressed. This was playing full of contrast, but dominated by Werner’s gift for creating a melody, of expressing and declaiming it, and of making it irresistible. A high point was a new tune Fall from Grace, “a kind of requiem” explained Werner, which is due to appear on a new solo CD at the end of this year. A wonderful deceptively simple tune. By the time he played that, the audience had been conquered and were still, silent and thoroughly attentive. It is what a great musician can do. As a returning artist here, with a clear affection for this audience and this festival, he also seemed completely at ease in the situation, and even treated the people to a rarity: he sang. His new song Christmas time is almost here – again is dedicated to those who feel the need and the imperative to shirk enforced festiveness –  (I don’t think there is a word for it, perhaps there ought to be). 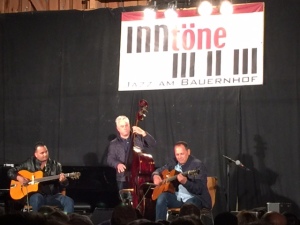 The Rosenberg Trio, second up, also won the audience over with their gipsy guitar playing . The leader Stochelo Rosenberg found himself in an unusual role – “I’d forgotten how tiring playing rhythm guitar is,” he said.  Stochelo doesn’t do that much of it, because the trio’s normal guitarist, cousin Nous’che Rosenberg is a specialist who does nothing else. Nous’che, however, had suffered an injury and his youngest brother Moses Rosenberg who plays lead as well as rhythm guitar had stepped in. There were some exchanges fizzing with energy between the two guitarists. Festival ’48 by Django Reinhardt was the first genuinely fast tune, and it had them vying with each other for sheer speed during it, and simultaneously reaching for a towel to wipe their brows when it was over.

Also projecting huge energy were the trio of Rom Schaerer Eberle. This group of two Austrians has been very well described by Jon Turney and I would second every word Jon has written. Yes, on paper, what could possibly sound less alluring than a trio of voice guitar and trumpet? And yet – in practice – what a band this three-year old concoction with two albums out now is. The many sound worlds and the energy they create, their vivid imaginations, their Westbrook-style desire to create music from the most incongruous ideas – e.g. the sound of money in the form of computer bytes being siphoned off by bankers in the tune Cooking the Books.

Jon Cleary (review of most recent CD here) with his young trio who all vocalize, was the ideal choice to keep the energy and New Orleans (metaphorical) warmth going in the late set which started at around 1am.