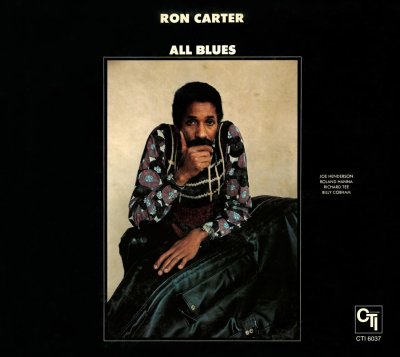 In many ways CTI has never seen better days — despite being pretty much defunct. It was a record label championing jazz that was both modern and accessible, creating a wealth of classic recordings. Its original heyday ran from approximately 1967 to 1977, while in later decades its wonderful recordings and glorious cover art were reduced to the ignominious scale of CD. But in recent time things have been looking up for CTI. Its finest recordings are being reborn on high quality vinyl, with regular releases from at least three audiophile labels.

This is heartening news because, in addition to featuring the top musicians of the day, the CTI sessions were beautifully recorded. Invariably engineered by the great Rudy Van Gelder, they just sound terrific. And, crucially, the master tapes survive in excellent condition, making them a prime resource for anyone who knows how to manufacture a nice slab of vinyl — and the people at Pure Pleasure certainly know how to do that, as this lovely new release by bassist Ron Carter demonstrates.

Carter made his name in the 1960s playing with the second great Miles Davis Quintet and on important sessions for Blue Note records (taken together, this represents just about the greatest CV any jazz man could have). In the seventies he became one of the mainstays for CTI and recorded a series of albums as leader there. This is the second of those, recorded in 1973 with a superlative, tight little quartet consisting of Joe Henderson tenor sax, Roland Hanna piano and Billy Cobham drums.

Most of the tracks are Carter originals. The opener, A Feeling, has a modernist jollity and jerky congeniality that suggests Monk — although perhaps more in Henderson’s tenor and Carter’s bass than Hanna’s clean, concise playing. Light Blue puts a spotlight on Roland Hanna. His poised, considered, melodious piano almost suggest a classical piece — it’s Ron Carter’s darkly bubbling bass which makes it jazz.

On 117 Special Carter’s plucked bass has a country guitar sound and the clean dashing of Billy Cobham’s cymbals contribute to that down-home feel while Richard Tee joins the session for this one track on electric keyboards. But it’s Joe Henderson’s plump, sweet tenor that really entrances the listener here. Rufus concludes the four Ron Carter compositions on the album. Its intro is trash-talking fun with Carter, Cobham and Henderson locked together so tightly it’s hard for the listener to peel them apart. Hanna’s piano solo is a jaunty, discursive downhill trot. This track in particular emphasises what a fine recording we have here, with the different instruments clearly defined in space but harmoniously woven together. Joe Henderson’s tenor especially seems to be resident in the corner of the room. (What a lovely thought.)

Not surprisingly Miles Davis’s All Blues is a highpoint of the album, taken at a deliberate and stately pace, creating excitement through the very slowness of its inexorable onset, with Carter’s bass slicing the tune out of the air while also providing a formidable pulse. The bass playing is so melodic and articulate it could almost carry the melody itself, but then Henderson’s lusciously articulate tenor comes in, and the listener just melts. This is so good it gives you butterflies in the stomach. Henderson’s solo purrs softly and seductively, a kiss in the ear. After the emotional intensity of All Blues, the witty old Matt Dennis standard Will You Still Be Mine is a pleasant chill out. Carter’s bass does a remarkable job of singing the vocal line here.

This is intelligent, complex jazz played by masters of the form, yet it’s also the most relaxing, pleasing and uplifting of listening. Pure Pleasure is aptly named here. It’s great news that the label has added this album to its portfolio of CTI reissues. The remastering (by Ray Staff at Air Studios in London) is just beautiful and the pressing is immaculate. If the original CTI records had a flaw, it was being pressed, sometimes in a slapdash fashion, on wafer thin vinyl. This 180 gram reissue does full justice to the music and is irreproachable, giving us a wonderful session in what might be its ultimate form — unless you have access to Rudy’s original master tapes.