A completely packed Wigmore Hall saw the final event of Christian McBride’s tenure as Jazz Artist in Residence at the hall, for which his guest was soprano / opera star Renee Fleming. They were due to be joined by Julian Joseph, but he was indisposed, and his place was taken by a classical pianist Bretton Brown and Gabriel Latchin, whose association with with McBride seems to be building into a wonderful story. He was flawless tonight (see this previous chapter of what is becoming a fairytale). 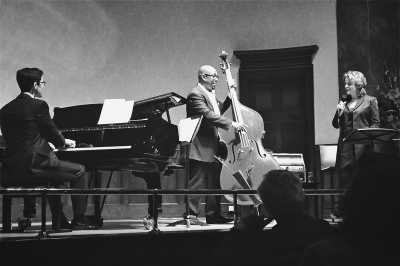 The programme was entertaining, wide-ranging, never dull. One distinct oddity was an unusual  vehicle (designer not named) on which the bodywork of Rogers and Hart’s My Funny Valentine is placed over  the undercarriage from Beethoven’s Moonlight Sonata, which also involved the two pianists swapping the driving-seat twice tonight.

A highlight was Fleming’s glorious, sensitive, quiet unfolding of the sinuous melody of Ellington’s Prelude to a Kiss, morphing briefly at the end into Schubert’s Gretchen am Spinnrade.

McBride’s deep groves and monster sound, produced without any amplification was inspiring. Pictures kindly sent in by well-disposed, well-placed, sharp-eyed audience members – thanks! The whole-audience standing ovation at the end had a justifiable inevitability about it.