CD REVIEW: Sun Ra and his Arkestra – To Those of Earth and Other Worlds 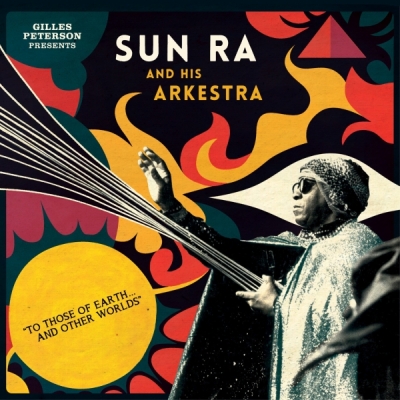 Sun Ra and his Arkestra – To Those of Earth and Other Worlds
(Strut 125CD. CD Review by Peter Jones)

There’s a scene in the 1974 film Space Is The Place where Sun Ra and his entourage of Egyptian gods emerge from a spaceship shaped like a double-ended humerus with horns and painted like the Mirthmobile from Wayne’s World. ‘What is the power of your machine?’ demands a waiting reporter. ‘Music’, replies Ra. Some young black Earthlings ask him if he’s real. No, he says, he’s not real, and nor are they. If they were real, they would exist in this society, instead of having to demand equal rights with other humans. ‘If you were [real], you’d have some status among the nations of the world.’

This dialogue goes some way to explaining Sun Ra’s self-appointed mission to free the black race through the mysterious and unearthly power of music. Despite all the dressing up and leg-pulling, there was a social purpose to it all, an oblique seriousness that kept his strange Afro-futurist project going through nearly four decades and more than 125 albums. As a fully paid-up surrealist, psychedelic artist and ignorer of all generic boundaries, he was years ahead of his time, and a profound influence on the work of Melvin Van Peebles, George Clinton, Frank Zappa and Captain Beefheart. In his restless experimentation, he became a collector of keyboard instruments and an early adopter of the Moog synthesizer.

Considering Sun Ra’s avant-garde reputation, his compositions could be surprisingly melodic, e.g. When There Is No Sun (1978). He made regular use of vocalists, of whom June Tyson was the most notable. Sometimes the singing was wordless, as in Reflects Motion Part 1 (1962), sometimes lyrical, either with repetitive chants (Somebody Else’s Idea – 1971) or more conventional lyrics, as in Dreaming (1955), recorded with a doo-wop quartet. Many of the instrumentalists who passed through the ranks of the highly-disciplined Arkestra were well-known in their own right, including Don Cherry and Pharoah Sanders.

The ever industrious Gilles Peterson has compiled this release, which consists of tracks recorded between 1955 and 1987. The accompanying booklet is exemplary, with a full biography of Sun Ra and his ever-changing bands, and fascinating, detailed information about each track.