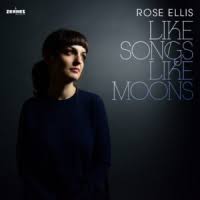 Like Songs Like Moons is the first album by vocalist and songwriter Rose Ellis (also known as Roos Plaatsman). After studying music in Groningen, in her home country The Netherlands, Ellis won a Scholarship to study for a Master’s degree in New York, where she recorded this record.

This is an impressive debut, not least because Ellis wrote eight of the eleven tracks herself. I am reminded of Joni Mitchell by her storytelling lyrics, and a similar approach to melody, which makes for unexpected twists and turns before the song is run. She also includes a small prologue in some of her songs, in the manner of 1940s songwriters like Cole Porter. She does this in one of my favourites from this album, Early in the Morning, which incidentally won her the ASCAP Composers Award in 2016 at the Lincoln Center. This track shows off her lovely voice, especially when she harmonises sweetly with herself, and her very fine band.

Much of her jazz inspiration “comes from jazz greats such as Ella Fitzgerald, Sarah Vaughan, Carmen McRae and Billie Holiday”. You can hear the influence of her heroines, certainly – she can scat brilliantly, and her range is a match for Ella’s, but it is definitely her own voice. Her technique is impressive – a fine clear voice and beautiful phrasing. One of the tracks is a previously unrecorded Billie Holiday composition Preacher Boy, which she sings appropriately poignantly, with a simple piano accompaniment.

She is well served on this record by her excellent band of musicians: American Glenn Zaleski on piano, Chilean (but currently based in Brooklyn) Pablo Menares on bass and American Ross Pederson (who is currently on tour in Europe with his other band The Manhattan Transfer) on drums.

The other standout track for me is the confident Don’t Be Afraid, which sounds like a previously unheard Bill Evans song. Zaleski, who cites Evans as one of his big influences, plays superbly, but then so do the rest – these performers play as a quartet of equals rather than singer and sidemen.
Ellis and her band are all based in New York, and play there often, but she does play in her native Groningen occasionally. Check her website for details.