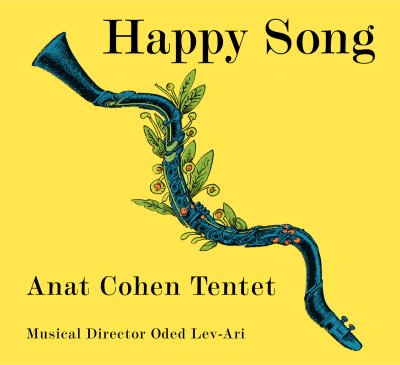 Anat Cohen is a firmly established international phenomenon on clarinet. She’s achieved the remarkable feat of topping the Downbeat critics’ poll for her instrument every year since 2011 and this release exploits the resources of a large ensemble giving rocket boosters to an eclectic mix of pieces with roots in Brazil, West Africa, jazz and klezmer with a good sprinkling of Cohen originals. Musical Director Oded Lev-Ari supplies dramatic, high energy arrangements and keeps the band on track.

The title track gets things going with a bluesy flurry from the clarinet. A snappy, understated and funky groove from bass and drums anchors the ear-tweaking riff of the theme and they’re off – the tentet are roaring, Cohen soaring over them. Its hard not to get up and jump around. The energy never dips, but the moods shift throughout what could be a tour of Cohen’s favourite musical ports of call. Her Valsa Para Alice, is a swaying, romantic waltz. There are nods to classic repertoire with Oh Baby getting an outing and a lush reading of Goodbye. Egberto Gismonti’s Loro takes us to Brazil and Kendougou Foly closes the set with an irresistible polyrhythmic groove, an exultant call and response interchange between the leader and the ensemble, and then a bustling change of pace to go out on a high. At the centre of the set is a suite of three pieces, two by Cohen and a Lev-Ari arrangement of a traditional tune, that draw on klezmer and segue neatly, building the drama.

This set is a tour-de-force. Lev-Ari’s arranging unfailingly sustains tension and builds drama and there’s scintillating playing all round. Vitor Gonçalves solo on Loro is a delight, swirling and rippling across the pulsating groove. Sheryl Bailey lets rip with a gloriously distorting guitar solo on the anthemic Trills and Thrills, guitar and clarinet blending and twisting around each other at the climax and, of course, it’s the exuberant, peerless Cohen’s clarinet that’s threaded throughout this exuberant set.

The recorded version of the Tentet is a blast, seen live, they are surely unstoppable. Currently, a quick flit to North America to catch them on tour is the only chance of seeing them. Here’s hoping for a European tour.

Mike Collins is a pianist and writer based in Bath, who runs the jazzyblogman site.