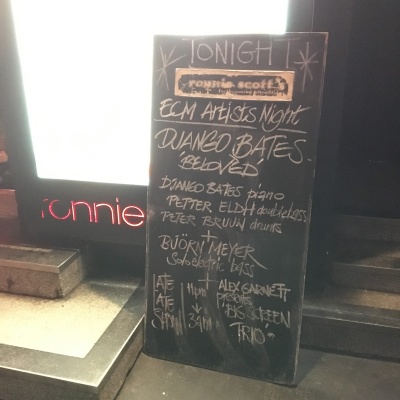 Django Bates’ Belovèd trio could be characterised as a left-of-leftfield postmodern standards trio exploring, celebrating, and deconstructing Bird and Bill Evans… and more. A neurotic reaction to the space occupied by piano trios from Evans’s to the Bad Plus, one of their central influences is the rhythm section of Bill Evans’s classic trio with Scott LaFaro and Paul Motian, embracing, Django says, “this very organic and sentimental way of playing”—but also its celebrated psychic synergy.

The Belovèd Trio has played together for over a decade. Django was initially attracted by Swedish bass player Petter Eldh’s “punk” approach but Eldh is more evident as a warm, listening bass player. Drummer Peter Bruun has a gift for responsive protean rhythm that supports the music and his fellow players at a psychic level.

Initially the trio rehearsed and worked in private. A call from Copenhagen asking for a contribution to a celebration of Charlie Parker led to Django making some arrangements of Bird: “I took the music and I put it in front of the guys and it was so easy to learn new music ‘cos we’d done all of the groundwork. We didn’t have to talk about dynamics or sensitivity or having the control at different points with different people.” Developing the vision of the group, he brought more of his own compositions to the fray.

Last year’s album The Study of Touch is intensely written and played. Bates’s original compositions are hard to pin down, eclectic from moment to moment, but always with an overriding intelligence and an underlying conceptual simplicity. In interview with Radio 3’s Jazz Now in November he said “The basic idea for those pieces was born during one walk in a park with a piece of paper and a pencil when I just wrote down some very banal suggestions to myself. One of them would be: okay, write a piece that starts on the very top note of the piano and works its way in an interesting intricate way all the way to the very bottom note—such a childish idea, and when I got home I was like Okay! Let’s start doing this! And very soon it turns into a fun puzzle: how do you get there without being really obvious and putting some other layers of interest in other directions?”

The music varies from touching to pressing, with an urgent sense of now. “A lot of the contemporary trios are doing something very quantised and almost robotic which I find very fascinating. Sometimes I think it’s a reflection of the way the world is going, we’re trying to compete with robots, and this trio goes the other way.” Django’s composition Slippage Street in particular is a kind of reflection on this perceived new way, the quantised way, the robotic exchange. Rhythmically dislocated, with torrential metrical enjambments, it typifies the difficulty in joining these pieces up into a form in your head. Maybe call it a Zorn form, a texture rather than a shape…

But it’s not as chaotic as it seems. There’s order underpinning it. Bits that sound like they’re speeding up, they’re not, they’re just ascending through the ‘rhythm scale’. What that means is, you have a pulse that is divisible into two, three, four, five, more, and you can move freely between these divisions with a complex effect without losing the simplicity underpinning it. It can have a disorienting effect, but it’s truly amazing. They’re doing this at the same time as something harmonically complex and dynamically rich. To sustain that complexity and depth and dynamic range for so long is extremely impressive.

The album makes good its title, and A Study of Touch in particular has a breezy delicacy that soothes the savage breast while stoking its fires. In performance at Ronnie’s, Django reigned, heart and soul of a king, fingers of a prince. The advanced interpolations of Parker are absolutely mind-bending. Staying alert to the constant variance of material and feel, they crashed into Donna Lee, restlessly torn up. To see Django, unchained from conventional approaches to Parker, was thrilling. His (and our) intense familiarity with the tune allows them to shred it into beautiful new shapes and take some extreme licence with the material without abandoning the fond sense of it. The richness of Parker’s lines gives plenty of scope for tearing it up, with a crazy sense of meter and trust between the musicians. They just go for it. Many of those free-rolling moments of seemingly psychic group playing are actually written, a staggering achievement to remember and play, embracing happy accidents with minimal out-loud direction from Django. Django and the trio obey a stylistic and rhythmic restlessness akin to the playing of much younger players who, with the availability of music on the internet, have it all at their fingertips. Django at 57 is a true contemporary, with that youthful stylistic sense of mashup: progressive but steeped in a deep love of the music. He says: “Every time I write a melody, at the heart of it is all the stuff I’ve grown up listening to.”

2020 will be Bird’s centenary. Django mooted the idea of playing all of Parker’s tunes, which might be between one and two hundred numbers. About that there’s some confusion. Take for example Passport, which graces the album. Bird actually recorded two completely different tracks called Passport, one of which has three different takes, with three different titles (Segment, Diverse, and Passport). Playing with Kenny Dorham, Al Haig, Tommy Potter and Max Roach, Parker recorded so fast that titles could easily get mixed up. Max Roach said “There was a code: get to your best shit fast. Don’t fool around, get to your climax now…” As well as Parker having two passports, there’s also a Parker tune called Visa. This Bird has flown!

AJ Dehany is based in London and writes independently about music, art and stuff. ajdehany.co.uk
AJ is grateful for additional insights into the music shared with him by pianist and fellow LJN writer Jake Werth

Sadness all the way down
Confirmation (Parker)
Peonies As Promised
My Little Suede Shoes (Parker)
Little Petherick
Slippage Street
Waltz for Debby (Evans)
Happiness all the way up
Donna Lee (Parker)
We Are Not Lost, We Are Simply Finding Our Way
The Study of Touch
Passport (Parker)
Ah Leu Cha (Parker)
Giorgiantics
Star Eyes (de Paul/Raye)
Now’s the Time (Parker)

LINKS:
CD Review by Jon Turney
Django Bates’ Belovèd The Study of Touch is released on ECM and streamable on Spotify
An Audience with Manfred Eicher is at the Royal Academy of Music is on 12 February
A favourite ECM joke
Sebastian’s Jazzthetik feature about A Study of Touch