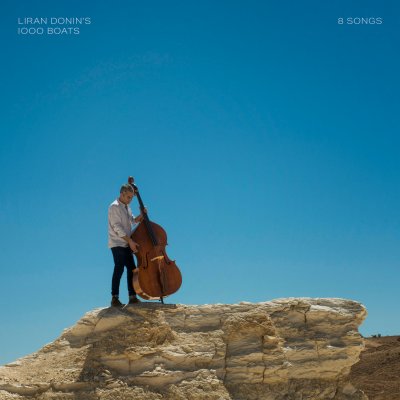 Liran Donin is probably best known to jazz fans as a member of Led Bib and a regular in Arun Ghosh’s band.  But the London-based Israeli-born bass player is also a ubiquitous performer in folk, rock and world music environments as well as being a composer and successful record producer.  This CD is his first as leader with his own band, 1000 Boats. Donin composed all the music and produced the CD, and he has gathered a fine collection of interesting musicians.

Chris Williams, a fellow member of Led Bib on alto and Josh Arcoleo on tenor are both muscular improvisers. Italian born pianist Maria Chiara Argirò provides some delicate moments and a rippling sound that is often the background for Donin’s melodic solos. Ben Brown on drums manages to segue from middle eastern rhythms to solid rock beats as required.

These musicians, like Donin, encompass a wide range of styles and backgrounds which are moulded here into a very accessible album that is on the boundaries of world jazz without losing its jazz credentials.

The structure and composition is sometimes quite complex, with most tracks going through several different phases, but the lyrical quality is unsurprising give that Donin originally composed this music with words in mind, hence the title of 8 Songs.

The Story of Annette and Morris, for example, starts with a delicate eastern melody on the piano, joined by the bass and drums, and then the melody is picked up by the saxes playing in unison. The beat gets stronger and then there’s a pause for a melodic bass solo over a simple piano riff. The saxes rejoin with increasing power as the beat picks up again, and then back to delicate piano to finish the track.

Donin’s bass is a powerful presence throughout, driving the groove forward, setting the pace when necessary, and delivering strong melodic support. It’s strong enough to be an important part of the music throughout, without being overbearing – which has to be a tribute to Donin’s skills as the producer as well as his bass playing.

Occasionally there are tracks that flirt with the smoother style of jazz, but in the main the music is accessible without being too simple.

The CD will be launched on 31 May at the Vortex in London.