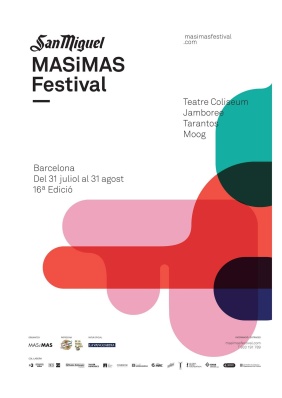 The 16th Mas I Mas Festival in Barcelona will run from 31 July to 31 August. The Festival takes in five venues: The Teatro Coliseum, Barcelona’s main jazz club the Jamboree, the Tablao, Tarantos and the Moog Club, and will host nearly 70 shows, presenting an eclectic mix: jazz, blues, soul, swing, R&B and electronic music. Brewer San Miguel is lead sponsor.

CONCERTS IN THE TEATRO COLISEUM

The 1700-seater Teatro Coliseum, at the intersection of Corts Catalanes and La Rambla, will present five concerts including the festival’s opening and closing concerts

GLOBAL MUSIC FOUNATION – MUSIC IN CLUB, SQUARE AND ON THE BEACH

Global Music Foundation, which has previously held its summer courses in Certaldo Alto in Italy, in Krk in Croatia, Saarwellingen in Germany, and in London, will be holding its 2018 course at the Taller de Músics and the CNAB (Club Natació Atlètic Barceloneta).

There will be five concerts at the Jamboree Club featuring members of the course faculty such as Eddie Henderson and two-time Grammy nominee Rene Marie:

From 2-6 August, nightly from 6.30 pm student and faculty vocalists will perform on an outdoor stage in the historic Placa Reial in the Barri Gòtic.


OTHER HIGHLIGHTS (MORE STILL TO BE ANNOUNCED)

LINKS: Mas i Mas Festival websiteApplication for places on the GMF Course