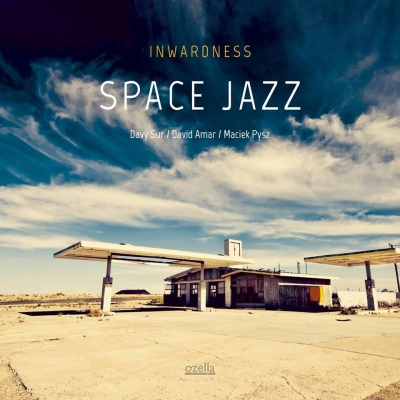 The memory remains vivid of three musicians taking to the stage at 2017’s Manchester Jazz Festival, where an intimate gathering had little or no preconception of what they might experience; and, in many ways, neither had the performers. Inwardness comprises Davy Sur (drums, percussion), David Amar (soprano sax, synthesiser, electronics), Maciek Pysz (electric and acoustic guitars, effects) – and their vision is to create improvised soundscapes both from and using the space around them.

On that balmy summer’s afternoon, the trio’s set developed entirely out of themes invited from the audience; and the remarkable gift they offered was to stir emotion from these hitherto unheard sounds and expanses, visibly affecting some of those present. Sur, Amar and Pysz are individually involved in many projects; yet, with this concept, their ultimate freedom clearly has the potential to unlock something powerful within listeners’ hearts.

Inwardness’s debut release, Space Jazz, then, provides a different opportunity – to re-hear and settle further into their collaborative imaginings. And whilst there’s a hint that a foundational idea or two may have been discussed beforehand, the trio have used the renowned clarity of Italy’s Artesuono Studios to create, spontaneously, an immersive and visually-laden programme. Intimated by the cover art, over 54 minutes there’s a sense of progression as vistas and situations seamlessly arrive and then disappear from view, and the sensitive interaction with each others’ creativity (evident when seen live) is key. Nothing is ‘off limits’, though this more ambient side of jazz improvisation is never demanding in terms of tonality.

So it’s very much about personal discovery and response. Numbers such as Morning, Afternoon and Seven Lakes fill the air with Amar’s hazy soprano melodies and Pysz’s typically precise guitar chords and riffs, whilst Sur details everything with crisp, sometimes echoic percussion. Electronically distorted groundswells and brays suggest lunar journeying and weightless arrival in Through Space, Moon and Back in Space; and the simplicity of soprano and open guitar in Before and After is beautifully felt. Elephant Calling is perhaps the most pictorial of all, its pacey, drum-driven undergrowth chase a welcome shift away from the album’s predominant tranquillity. Three-part One Hour… is at times redolent of Brian Eno before introducing various, rhythmically fragrant udu patterns; Vesuvio seems to cleverly imply creeping lava flows through bubbling electronics and percussion; and Rise Up’s daybreak serenity warms the earth with ornate soprano against smooth waves of pedalled guitar and soft cymbals.

Described by the band as “suspended moments, the finished and unfinished landscapes living inside our inwardness”, Space Jazz is subtly cinematic. If you’re receptive to these shifting musical perspectives, they’re likely to transport you to another place.