Singer-pianist JEREMY SASSOON has a new album out, Jeremy Sassoon and Friends. It was recorded live at Pizza Express Dean Street in 2017. He will return there for album launch gigs on 6 and 7 July, followed by performances in Berlin and Manchester. He explained the background to Sebastian:

LondonJazz News: Where are you from, and where do you live now?

Jeremy Sassoon: I’m from Manchester and I still live there. In recent years however I’ve been increasingly gigging down in London and worked out I’d actually spent more than two months there last year.

LJN: And you are actually Dr. Sassoon, right?

JS: That’s right. I went to medical school at The Middlesex Hospital in London at 18 and having qualified as a doctor, I worked in the hospital system for a further seven years, most of which was spent training as a hospital psychiatrist. An excellent training with which to enter the world of music I may add.

LJN:  Ray Charles has been quite a big deal for you… how did all that start?

JS: In 2009, I was trying to think of a new project to submit to the Manchester Jazz Festival. At the time I was just a keyboard player/MD and hadn’t started singing. I was working with a great jazz and gospel singer Paul Bentley and came up with the idea of a Ray Charles project since Ray’s balance of jazz, blues and soul matched exactly mine and Paul’s style. I teamed up with Iain Dixon (saxophone) and put together a great 11-piece (and later a 17-piece band), which amongst other musicians featured Mike Walker on guitar. As it happens Paul soon gave up singing altogether and all of a sudden I had to either learn how to sing the show or disband it. After several deep breaths, I managed the former and have been singing and fronting gigs ever since. The show has provided me with some great moments, like headlining at Ronnie’s for London 2012, playing the Jazz Cafe, Bluesfest at the O2 and headlining Manchester Jazz Festival twice. Next month, we’ll be at the Wigan International Jazz Festival amongst some illustrious company…

LJN:  There is a story about a song of yours being picked on Desert Island Discs…?

JS: This was a story involving my two career worlds colliding. Whilst I’ve been plugging away as a gigging musician, my medical friends and colleagues that I’d qualified with had become eminent professors and consultants. One such colleague Hugh Montgomery, a professor of Intensive care (and the holder of the world record for underwater piano playing) was invited onto Desert Island Discs in 2014. He was a big fan of my music and chose my version of the song The Things We’ve Handed Down as his castaway’s favourite. I’d never seen such a flurry of activity on my website & iTunes as I did that month and the song hit Number 1 in the iTunes vocal download chart, ironically knocking Ray Charles off his perch. And Frank Sinatra and Etta James. That was my 15 mins of fame.

LJN: And you have (professional) musician siblings… what do you attribute that to?

JS: Yes, my sister Julie Sassoon is an amazing composer and pianist based in Berlin. My other sister Lucy is a singer-pianist living in Spain and although my brother Laurence chose the “proper job” route, he was just as accomplished a musician. To what do I attribute it? Some sort of complex Sassoon chromosomal abnormality


LJN: What is the story of this album ? It was recorded live – do you record all your concerts?

JS: No, I rarely record my concerts. I just had a gut feeling about this band. I picked musicians from all different areas of my musical life, none of whom had even met each other until 48 hours before the recording. One rehearsal later and I knew I had to video it, even if just for a couple of YouTube clips. It was only when we got the footage back that we were all surprised at the quality and I decided to make an album.

LJN: And what are the songs on it?

JS: The songs weren’t picked with an album in mind, but were selected as relevant for a 2017 gig. Glen Campbell and Walter Becker had died that year, so Wichita Lineman, Peg and FM chose themselves. Compared to What and Ballad of the Sad Young Men were from one of my “Top 3” albums, First Take by Roberta Flack. The  Chicken was dedicated to my drummer Michael who had the rare privilege of playing it with Jaco Pastorius for a whole European Tour in the Jaco/Bireli Lagrene Trio. Bruce Hornsby’s anti-racism comment The Way It Is was chosen with Donald Trump in mind. Perhaps the most original arrangement on the whole album is a haunting version of Eleanor Rigby, which I’ve been regularly urged by many of my followers to record. I hope everyone likes it.

LJN: And who is in the band?

JS: The band is based around my long-standing partnership with Berlin-based drummer Michael Kersting. Michael has an incredible pedigree, having played with Chet Baker, Jaco Pastorius, Trilok Gurtu, and Richie Beirach and I really click with him.

With Michael in place, I put together the team from there. Jasper Wilkinson is a close friend and multi-instrumentalist from Manchester who plays bass (but could just as easily have done it on sax or guitar). Like Michael, he just “lays it down”, making the rhythm section so easy to play over. I’ve been playing with up-and-coming saxophonist Alexander Bone for 3 years now. He seems to pick up awards all over the place, but has a great soulful and melodic side to his playing too. And Richie Aikman completes the quintet on guitar. I saw him on somebody else’s gig two years ago at the 606, and “poached” him. He’s great, and another truly talented 22-year old. 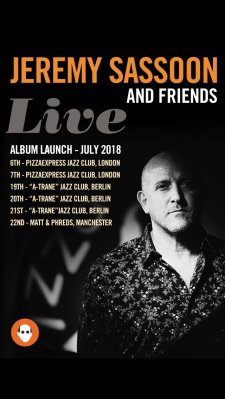 LJN: What are you especially looking forward to with the launch?

JS: I just love the general buzz that happens around the launch of a new project, and there’s something special about opening the first box of your own CDs when they first arrive. But does anyone buy CDs anymore?

LJN: And what are you dreading?

JS: England getting into the quarter finals of the World Cup. They’re being played the same nights as my launch dates.

LJN: What’s the project after that?

JS: There could be an interesting project involving my Ray Charles Project on the horizon, but if that doesn’t come off I’d like to get straight into recording a new studio album. I’m getting a taste for this.

JS: I’ve never heard of the second one. (pp)