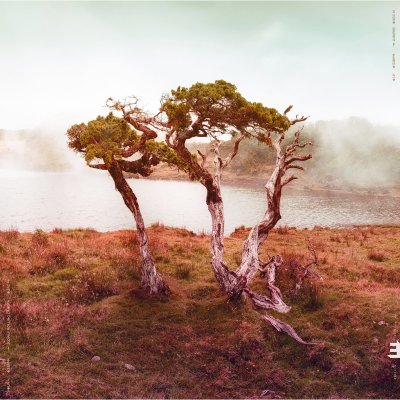 Slowly Rolling Camera fuse together jazz, classical, various dance genres and several other influences into a compelling whole. A trio of Dave Stapleton on keyboards, Deri Roberts electronics and Elliot Bennett on drums, augmented throughout by many other musicians, Juniper consists of catchy riffs and broad, anthemic soundscapes. Their approach to melody, rhythm and dynamics brings to mind the Esbjorn Svensson Trio and the Neil Cowley Trio.

The musicians the trio have surrounded themselves with have a large influence on the sound. Bass player Aidan Thorne, guitarist Stuart McCallum, formerly of the Cinematic Orchestra, and saxophonist Nicolas Kummert form an inner circle around the trio; McCallum’s guitar echoes throughout the album. There are also appearances from Mark Lockheart, Tom Barford and Sam Glaser on saxophones, and Neil Yates and James Copus on trumpets. Having so many players available gives the trio a freedom to expand their sound.

Stapleton wrote all the pieces on the CD, and its tracks range from the quiet, gentle A Thousand Nights and Natures Ratio up to large scale ensemble pieces such as The Outlier. Several tunes have a thoughtful, moody feel, such as Eight Days, which features a mournful trumpet, and the opening of the title track Juniper.

Bennett’s approach to the drums brings dance music inflection to many tracks. It doesn’t distract but leads the tunes somewhere else, driving the music one way and another.