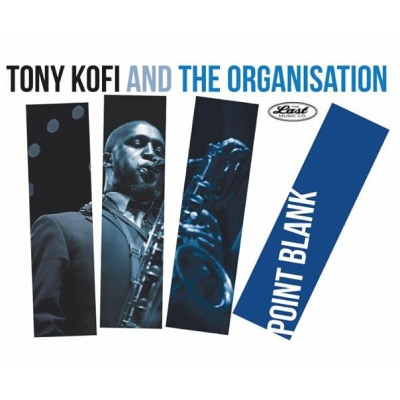 The sight of Tony Kofi picking up baritone sax never fails to produce a tremor of excitement – and on Point Blank, he and The Organisation fervently explore the post-bop jazz repertoire through ten choice numbers from ten artists/composers, including Wes Montgomery, McCoy Tyner, Henry Mancini and Jimmy Smith.

The Organisation – guitarist Simon Fernsby, organist Pete Whittaker and drummer Peter Cater – began life as a London-based organ trio, over a decade ago; and it was only a fortuitous depping opportunity in 2010 which brought Kofi into the mix (shortly after he had recorded in the US with Ornette Coleman), establishing this fine and peppy quartet line-up.

Guitarists Pat Martino and Wes Montgomery are represented in Cisco and Full House respectively – two confidently bustling, about-town blazers which prompt unbridled soloing – and Kofi’s fluency in the lower register is a delight. Woody Shaw’s Moontrane preens itself in true organ-trio character in the central section, with Whittaker’s pedals obviously mobile below his rippling chords and melodies. Summer in Central Park paints Horace Silver’s tune in warmer, afterglow-evoked atmospheres; and it takes something special to improve on a Jimmy Smith original, yet Ready And Able’s breathless, all-out boisterousness becomes irresistible here.