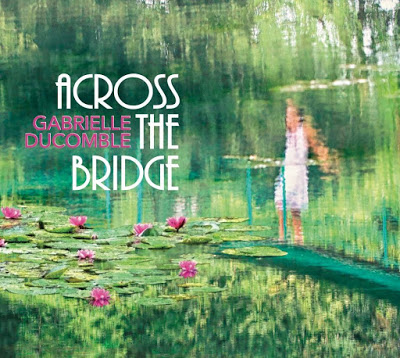 Blessed with a light, accurate, affectless voice rather in the mode of Stacey Kent, Belgian-born Gabrielle Ducomble has done very well professionally since nearly winning the French version of Pop Idol in 2003. Her musical métier is a mixture of chansons and tangos, her style sophisticated and nostalgic. Backed by a formidable band, her live appearances are justifiably popular.

But despite all the Parisian-style gaiety, is everything sweetness and light? Let us not forget that Belgium also gave birth to angst-tortured Jacques Brel, for whom life often seemed a grim struggle. In more recent years it has seen the emergence of the formidable Mélanie De Biasio, the queen of bleak urban soundscapes. And despite her sunny persona, you get the feeling that Gabrielle Ducomble would have been happier in the sunlit world of the 1960s, as the lyrics of this self-penned album suggest: “Ma vie semble bien vide, dans mon grand monde sans couleurs / La distance est ma douleur…” (Les Terrasses de Riz de Jatiluwih) and “I long to find somewhere to hide / In stone or glass, forget about the past” (Where is Home). For me, it’s this underlying sadness that gives the music a certain edge, where it might otherwise be a little bland.

Ducomble has been astute in her choice of musicians, including the awesomely talented Nicolas Meier on guitar. Here he is somewhat under-used, most of the solos going to violinist Richard Jones, who imbues everything he plays with fire and energy and great depth of feeling. Like a Bridge Across Your Heart gives his dramatic flair full reign.

With perhaps a couple of exceptions (Tell Me Today, Is This It?) the quality of the songwriting is impressive. Ducomble’s compositions are reminiscent of the ’70s folk-rock groups Renaissance and Fairport Convention. I suspect they will sound more gutsy live than they do on record. We may judge for ourselves as Ducomble continues her lengthy UK tour, the next leg of which begins at the Watermill, Dorking (16 October) and ends at The Stables, Milton Keynes (18 November).