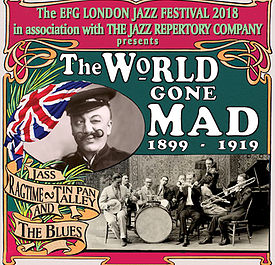 The Jazz Repertory Company’s EFG London Jazz Festival concert goes back to the very earliest days of jazz.. The World Gone Mad features a fascinating selection of the sounds emanating from America alongside the music of British composers and bands responding to the new musical influences coming from over the Atlantic. The programme will include At The Jazz Band Ball, Alexander’s Ragtime Band, Everybody’s Doing It, That Ragtime Suffragette, Heliotrope Bouquet and Dear Old Shepherds Bush.

Back in 2017 Richard Pite saw Martin Wheatley present a selection of mostly pre-World War 1 music at the Whitley Bay Jazz Party, got to know this largely unfamiliar music, and forged the plan to bring this music to London – not least because it stands in such contrast to the contemporary adventures in jazz found elsewhere at the Jazz Festival. Interview with Martin Wheatley by Richard Pite for LondonJazz News:

LondonJazz News: Can you tell us how you set about assembling the musical programme of The World Gone Mad?

Martin Wheatley: A lot of research and a lot of listening! We have ragtime but also other popular music of the time; we have early jazz but also the music that bridged the gap between ragtime and jazz, which has been overlooked until recently; we have some downright odd British attempts at jazz from the time when the word was known but the music wasn’t. I have tried to compile a programme that contains all of these elements, gives a snapshot of British musical life during this convulsive period but is, above all, entertaining.

MW: 1899 is often taken as the start of the ragtime era, when Scott Joplin wrote Maple Leaf Rag, and it gives us a foothold in the 19th Century, which is the origin of all of this music.

LJN: I know you have copious knowledge of this era of music but did you discover any new gems when researching the show?

MW: Oh yes! I found a wonderfully mad number called The Jazz Nightmare from 1917 which is a sort of riotous premonition of the musical world to come; a song called That Ragtime Suffragette, which is self-explanatory; the first vocal recording of St Louis Blues recorded in London in 1917 and the tune that was, probably, what the orchestra on the Titanic was playing as the ship sank – a beautiful piece by an English composer, Songe d’Automne.

LJN: Were there any colourful characters amongst the musicians, composers and entrepreneurs in the UK during the period of the music we feature?

MW: Plenty of those! One for example: W.H. Myddleton, also known as Count Safroni, who wrote Down South, was bandmaster of the Carl Rosa Opera Company but also found time to write novels, poems and travel guides and explore Borneo and Papua New Guinea. He now rests in West Norwood cemetery.

LJN: I know that you, like me, are a stickler for authenticity in reproducing early jazz. What are the main differences between popular music of the type featured in your show and that of the more familiar 1920s?

MW: One big difference is that it was far less well defined. It was all so new that the rules had not been formulated. A lot of interesting music is born of ignorance. Musicians at the time here didn’t really know how this new music was supposed to sound and there was nobody on hand to tell them how not to do it.

LJN: Was it your study of the banjo that led you to this music – is it well documented on recordings?

MW: In part, yes. I think the banjo was more important than the piano in the development of ragtime. The banjo is very well represented on early recordings largely because it recorded well on the equipment of the day. You’ll find lots of xylophone solos for the same reason!

LJN: We have invited pianist and vintage jazz expert Keith Nichols to be a guest in your show. Tell us a little about what he’ll be contributing?

MW: Keith will be covering the arrival of jazz from America. It makes sense to separate that from the music being made here prior to that and there is nobody better qualified to do that.

LJN: Finally, can you tell the readers of LondonJazz News why they should stump up for a ticket to The World Gone Mad – considering the embarrassment of riches on display on this particular evening of the London Jazz Festival?

MW: I’d be surprised to find another show on offer that is more varied, more of a revelation or more fun. (pp)

Richard Pite is Director of the Jazz Repertory Company

In addition to the concert, there will be a free pre-concert talk by Catherine Tackley at 6.15pm in the Cadogan Hall’s Caversham Room, exploring the music and musicians who paved the way for jazz in Britain.