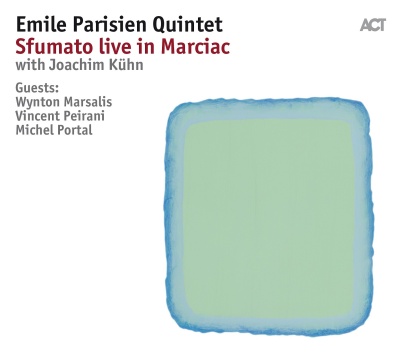 Soprano saxophonist Emile Parisien’s rise to prominence isn’t surprising given the strength of his recent releases: Chien Guêpe (Laborie, 2012), Spezial Snack (ACT, 2014), and the much lauded Sfumato (ACT, 2016). He’s not quite avant-garde, nor is he mainstream, but, more importantly, he’s never boring. What he offers is a music that seems familiar because it emerges from the well-stuffed vaults of jazz tradition (albeit of the more European than American kind) with adventure writ large. His compositions are memorable, and even though the ensemble work is super-tight it’s always loose enough for soloists to strike a spark or three.

Sfumato brought out his best qualities as both a composer and improviser, and it spotlit the role of pianist Joachim Kühn, an ACT label stalwart. Sfumato Live in Marciac, recorded in 2017, very slightly reduces Kühn’s role, but that serves to focus the listeners’ attention on what a good team player he is and how well the quintet navigates Parisien’s often complex charts. On the Marciac concert, guests Vincent Peirani (accordion) and Michel Portal (bass clarinet) stand out, as they did on Sfumato, but the surprise guest is trumpeter Wynton Marsalis who, on Temptation Rag (played by a witty trio of Marsalis, Parisien and Peirani), helps to evoke New Orleans trad as filtered through a distinctly Gallic sensibility.

Apart from the suite Le Clown Tueur de la Fête Foraine, a feature for Peirani (check out Belle Époque, his excellent duo CD with Parisien, where Temptation Rag first aired), which contains broad hints of both circus and cabaret, and the two-part Balladibiza, the Marciac concert doesn’t strictly follow Sfumato’s programme, either on CD or DVD. One or two tracks have been dropped and new ones introduced, which certainly keeps things fresh. Transmitting is one of the new pieces (featuring Portal, and, this time in more expansive mode, Marsalis) that easily earns its place in the new running order: a terrific composition. The expanded DVD programme fills in a few gaps, giving a welcome place to Poulp (in which double bassist Simon Tailleu and drummer Mário Costa finally get to solo) and Préamble. And let’s not neglect guitarist Manu Codjia, who plays splendidly throughout.

If you already own Sfumato and wonder whether buying the Marciac recording is really necessary, I’d say yes. Musically it’s an advance on Sfumato in certain respects, and the DVD – multi-camera, well-shot, capturing the musicians’ infectious interplay – is worth the price of purchase alone.