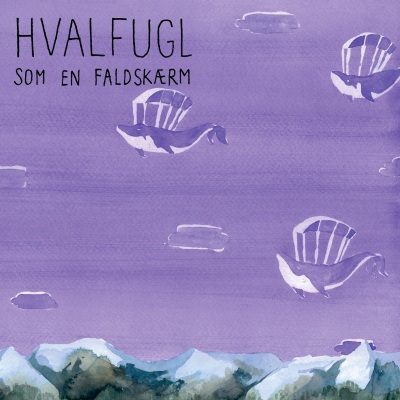 This bizarre sighting of purple whales serenely airlifted over a Scandinavian mountain range signals the arrival of the second album, Som En Faldskærm (like a parachute), by Danish trio Hvalfugl (their name formed from two words translating as ‘whale’ and ‘bird’).

As in 2017’s debut release By, Jeppe Lavsen (electric guitar), Jonathan Fjord Bredholt (piano, harmonium) and Anders Juel Bomholt (double bass) offer charming ‘hygge’ jazz through original pieces which suggest deep roots in traditional Scandinavian folksong – a bonhomie inspired by the likes of Bazar Blå, Esbjörn Svensson Trio and Jan Johansson. There’s nothing at all outlandish or groundbreaking about their sound world; yet with glinting dance figures and carol-like warmth, this spacious, instrumental blend somehow filters into the soul, creating an aura of calm. Indeed, it could be argued that there’s a soporific ambience to Hvalfugl’s music (perhaps that’s the point), but crystal-clear melodies and a shared empathy for phrasing and openness make it an attractive package.

At between three and five minutes’ duration, Hvalfugl’s creations are carefully-crafted gems. Ode Til Birk and Lystrup imply the north-eastern ‘going home’ of Mark Knopfler; simple piano tunes in Utopi and Mens VI Sover (While VI Sleeps) emphasise the beauty of the trio’s shared instrumentation; melancholic Mellem Bække Og Bakker (Between Brooks and Hills) grows in strength and positivity; and the title track closes with an impression of medieval or celtic influence as it gambols to ornamented piano/guitar and Bomholt’s ever-present double bass swell.

It could be imagined that enhanced instrumentation or effects (perhaps lilting soprano sax, bass clarinet, subtly prepared piano) might vary and expand the trio’s output – who knows, they may even delve into deeper, rockier grooves as chilling gusts disrupt the above cetacean squadron’s progress! But for now, Som En Faldskærm provides a welcome oasis from the clamour of worldly ‘muzak’ – and I applaud Hvalfugl as they continue their journey.