CD REVIEW: Huw Warren Trio – Everything In Between 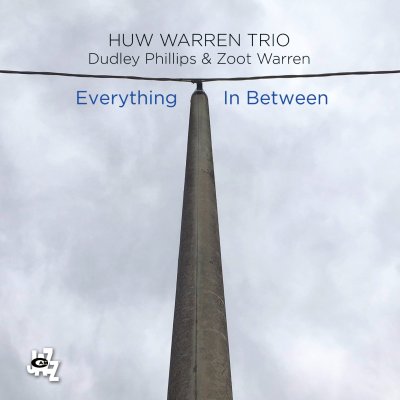 Pianist Huw Warren’s long-held association with and deep understanding of Brazilian music has continued to inform both the vitality and sensitivity of his own compositions as well as elegant reinterpretations of South American jazz jewels – and on new release Everything In Between, with bassist Dudley Phillips and drummer Zoot Warren, he presents a rich tapestry of works which are a delight to get to know.

Huw’s connection with Dudley Phillips goes back to 1990s quartet Perfect Houseplants (with Mark Lockheart and Martin France); and with son Zoot completing this trio, a near-hour of exquisite beauty and colour is created, happily belying the curious austerity of the cover art. Solo album Nocturnes and Visions (2018) confirmed the completeness of the leader’s pianism, and all of his experience is brought to bear, here, in a balanced collaboration which partners original compositions with music from the likes of Hermeto Pascoal and Pixinguinha. It’s a classic format, of course. But Phillips’ predominance with electric bass adds significant sparkle, his conversational playing often meandering along unexpected avenues – and both Huw and Zoot Warren, as rhythm-makers, also invite him to take a subtly amplified lead. Focusing on such detail – all captured by Stefano Amerio at Artesuono, Italy – adds another dimension to the experience.

Shimmering high-register clusters in Warren’s opening Mouli Baby are telling – an indicator of his particularly personal ‘voice’ – before its lilting, sunlit waltz proceeds in trip-up 6/8; and the oblique, rubato chromatics of title track Everything In Between have a reverberation of Django Bates as Phillips’ electric bass threads through its eventual piano-and-percussion pizzazz (an early stand-out). Hermeto’s Chorinho Pra Ele is a ‘smiler’ of a piece, its showtime melodies interspersed with impressively darting rivulets, while the trio’s Scarab groove bookends Egberto Gismonti’s originally frenetic Lôro in a different piano, double bass and drum spirit. And there’s unfettered Brazilian celebration in another of Hermeto’s – Musica das Nuvens e do Cha.

Simply put, this is not just another piano trio album. Love has been poured into its exuberance and tenderness… and it shows.

Everything In Between is released on 15 March (UK) and 29 March (worldwide).