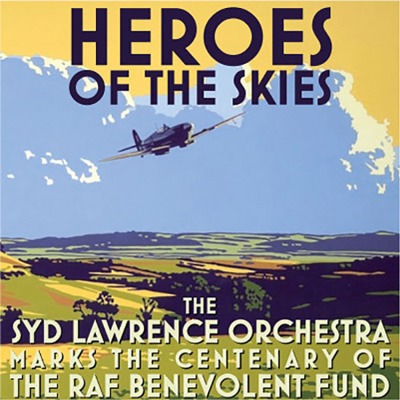 The latest in the Jazz Repertory Company’s Cadogan Hall concerts is Heroes of the Skies, which celebrates not only the great big band music of the Second World War but also marks the centenary of the RAF Benevolent Fund. It features the Syd Lawrence Orchestra and is presented by the BBC’s Nick Owen. Peter Bacon spoke to the orchestra’s musical director, Chris Dean.

As the Second World War slips from living memory, the abiding images and related sounds must be via film and music. And if they are to be fully, romantically evocative, that film footage is grainy and the music weaves its spell from beneath the crackle of shellac.

Inevitably that music is swinging big band jazz. According to some of the literature big band swing was past its peak popularity by the end of the 1930s, but was revitalised by the war. After all, it was a time when uplifting music was so vitally needed and what could be more life-affirming, more vital than serried ranks of saxophones, trombones and trumpets gleaming and swinging in full voice?

Chris Dean said: “I think the big band music was still pretty strong at the outbreak of the war but Glenn Miller undoubtedly had a great effect with broadcasts to the troops. Of course his music is the most enduring of all big bands since then.”

And Miller’s music, along with the Dorseys and others, will be heard, not with crackling static but in full-blooded actuality in Cadogan Hall on Saturday 11 May 2019. As well as leading the 18-piece orchestra, Chris will also be featured on trombone and vocals and is joined by fellow singer Sarah Eyden, best known as one of the Swingle Singers. The music in the programme will include Coming In On A Wing And A Prayer, Tail End Charlie, Airmail Special, the Battle Of Britain March, the Dam Busters Theme and The 633 Squadron theme.

There was a time when this music was distinctly “unhip”, particularly for a lot of young people. But the music of the past and jazz’s heritage has been successfully “rehabilitated” by organisations such as Richard Pite’s Jazz Repertory Company and through Chris’s own work with the Syd Lawrence Orchestra. Had his audience changed in the last decade or so?

“There’s always been an audience for big bands but never with younger people since the ‘50s,” Chris told me. “I’ve found over the years that our audiences who follow the band have regenerated.
In the 1970s when I joined as Syd’s lead trombone player the average age of the audience was around 50 with their children sometimes coming along. Those children still came through the ‘80s and ‘90s with their children. For some reason this year has seen a rise in audiences all over the country at all of our concerts.”

And it’s not just in the audience that one finds younger people. There is clearly appeal in the music for younger musicians too.

“There are so many great young players who enjoy this genre of music. I’ve had so many of them in the band and when they move on there’s always a new player just as keen and talented to replace them. The shortage is not the musicians but good quality big bands and places to play for them,” Chris said.

Would he namecheck a few for us?

“I’m so lucky to have Tom Dunnett as my lead trombonist and Dave Tandy on drums. Chris Snead is a wonderful young trumpet soloist and of course Louis Dowdeswell was in the band for a few years. Another very young trumpet player joining the band is Paul Mitchel – keep an ear out for him as he’s going to be really good.

“They all feed and learn from my lead trumpet player of long standing Tony Dixon. Tom Dunnett learned from the incumbent lead Ian Moffatt when he first joined. We are in a very healthy place regarding young talent.

And the music at Cadogan Hall won’t be restricted to the Second World War?

“There will be songs from right back, from pre-War and Vaudeville medleys with lots of RAF songs and arrangements to do with flying.”

Chris’s own background gives him a special relationship with this occasion.

“I was in the household cavalry for 12 years from 1965. I’ve always enjoyed military style music along with other genres, but this has been a reason for getting involved with RAF 100.”

TV broadcaster Nick Owen will be helping to create a context for the music. And there will be evocative film clips behind the band.

“It’s great to have Nick Owen with us. His presentation skills bring a gravitas to the concert.
He’s very popular and has long associations with the band. It’s a perfect fit.” (pp)

Heroes of the Skies – the Syd Lawrence Orchestra marks the Centenary of the RAF Benevolent Fund, is presented by the Jazz Repertory Company at Cadogan Hall in London at 7.30pm on Saturday 11 May 2019. (Cadogan Hall is a one-minute walk from Sloane Square tube station.)