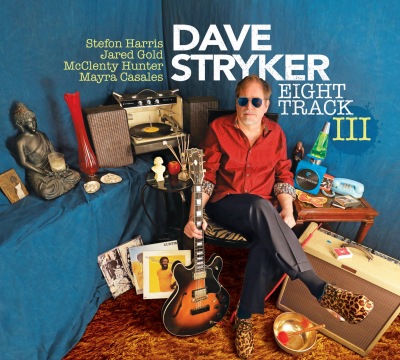 US guitarist Dave Stryker is something of an unknown quantity over here, despite an exceptional discography and decades on the road. He’s forever out and about in the US and makes the occasional visit to Europe but not here, as far as I know. Born in Omaha, he moved to New York in 1980 and toured with organist Jack McDuff and then spent ten years working with tenor-saxophonist Stanley Turrentine. He has made 28 CDs as a leader and appeared on a further fifty as a sideman. He teaches at university music schools and has written an instruction manual for aspiring jazz guitarists. The complete article, you might say.

Here, he reverts to the time-honoured format described by Cook and Morton as ‘generic guitar/organ jazz’ , that’s Stryker plus Jared Gold on organ, augmented by Stefon Harris’s vibes and the incisive drummer McLenty Hunter, with added percussion on six of the nine tracks. This is handled by Mayra Casales, her quiet underpinnings fitting in nicely.

As for repertoire, Stryker leans more to Motown than Cole Porter, to Curtis Mayfield and Stevie Wonder rather than Rogers and Hart, and that may tell you plenty. There’s a groove here that’s inviting and utterly engaging, the solos unfurling unhurriedly and with inbuilt swing. If you know the work of organ players like McDuff and Jimmy McGriff, or guitarist Grant Green who also liked this format, you’ll have a fair idea of what’s going on here much of the time. That’s not to say that’s it all riffs and drive, for the voicings offered by the Mullen-like Stryker, Gold and Harris combination are many and varied. Where organ groups would often be tenor-led, it’s refreshing to hear Harris’ colorations in the writing and for him to emerge here and there, all clarity and clever figurations. Take Stevie Wonder’s Joy Inside My Tears, taken at ballad tempo, the opening line and repeat motif neatly harmonized over Hunter’s basic beat, guitar and vibes duetting as the piece builds. We’ve Only Just Begun is equally eloquent, spare almost, Stryker playing the melody, the organ chording quietly, Harris maintaining the mood. For its desire to move beyond the stereotype, this is an album to cherish; as Stryker says in his note ‘playing these classic ‘70s tracks has been a great way to connect with people and bring more people to the music.’ Certainly worked with me.