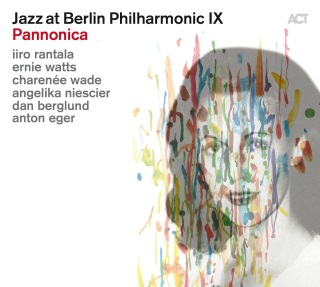 The latest release in ACT’s “Jazz at Berlin Philharmonic” series offers a rare chance to hear some of the leading lights of modern European jazz let loose on some choice classic tunes at this performance honouring the 30th anniversary of the death of Pannonica de Koenigswarter, the ‘Jazz Baroness’. The results are tremendously entertaining and enjoyable.

London-born Pannonica ‘Nica’ de Koenigswarter (1913-1988) was a scion of the Rothschild dynasty who fell in love with jazz on hearing Thelonious Monk’s Round Midnight on a trip to New York in the early 1950s She turned her back on her native Europe and her glamorous lifestyle and become one of the great supporters of American jazz. What followed was an eventful and bohemian life. Charlie Parker breathed his last on her sofa in 1955. She befriended and supported many musicians including Horace Silver, Bud Powell and Sonny Rollins, and had a long-term relationship with Monk; she took responsibility when they were both charged with marijuana possession, and he lived with her for the last seven years of his life.

ACT label founder Siggi Loch clearly feels an affinity with Nica; he also had a Damascene conversation to jazz at a Sidney Bechet concert at the age of 15, and has taken this opportunity to assemble an all-star group led by pianist Iiro Rantala and a programme based around the many tunes dedicated to her, including Monk’s Pannonica. Horace Silver’s Nica’s Dream is taken at a good latin lick with energetic percussion interludes from Anton Eger. Rantala’s piano work shines here and throughout the album, sparkling, precise and thoroughly musical, taking care not to make any effort to impersonate Monk or anyone else.

The opening take on Round Midnight is led by New York singer Charenée Wade with fine style, Bernard Hanighen’s lyrics beautifully accompanied by the bowed double bass of Dan Berglund. Rantala, Berglund and Eger take the chance to have a trio run at Bud Powell’s Cecilia – ‘run’ being the operative word, as the tempo is getting on for twice that of Powell’s original recording In the hands of these musicians it all seems perfectly feasible and the result is a bouncing four and a half minutes of action – perhaps not quite as effortless as it sounds, judging from Rantala’s slightly relieved cry of “Yes!” at the end.

One of the great pleasures of this recording is the saxophone pairing of American Ernie Watts on tenor and German Angelika Niescier on alto, leading figures from two very different generations. Watts, who shared the stage with Monk back in the day, is not afraid to venture to the upper reaches of his instrument. By contract Niescier, winner of the Albert Mangelsdorff Award in 2017 and currently making waves with albums like NYC Five with Florian Weber (check it out!), spends quite a lot of time at the lower end of her horn. It is not straightforward for the listener (even a saxophonist like me) to distinguish exactly who is soloing, which brings an extra joy to tracks such as Monk’s Boliviar Blues (named after the Bolivar Hotel on Central Park West where Nica took up residence).

Watts leads off with a wailing bluesy solo, followed by Rantala who dials down the energy only to pick it up again with rippling runs and crunchy chords. Niescier brings a more angular approach and is soon pulling outrageous figures which surprise and delight, yet never quite loses contact with the blues framework – well worth hearing here and on her other recordings. Add in a Dan Berglund bass solo and a frantic finale of sax-swapping, double time hair-raising joint improvisation and this track is a ten-minute master class in how to make the most of a tune.

As the album winds up with a lively take on Sally Swisher’s Get It Straight, a vocal version of Straight No Chaser originally recorded by Carmen Macrae, we are reflecting on a terrific collection of music from a memorable evening, beautifully recorded, full of energy and a great way to remember Nica. Very well worth a listen.

LINK: Preview some of the tracks on the ACT website