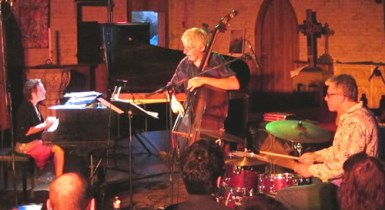 It is not easy to maintain a trio of in-demand power players when they are split across coasts, and have their hands full of projects. So this outing by Trio M – Myra Melford, Mark Dresser, Matt Wilson – is something of a reunion, and a rare treat. Absence makes the heart grow fonder, and the wait since their last performance together has led to an exciting, fresh-sounding reformation as part of Melford’s residency at the Stone. Whatever Trio M is, it is still an intensely collaborative thing: composition, improvisation and plaudits split three ways, and bringing out each player in music not necessarily composed for this scenario.

Through the opening trio of pieces – Wilson’s Al, Dresser’s Bradford, and Melford’s The Kitchen – no one plays to the script as the pendulum of focus swings amongst the group. This is a land of scattered drums and coordinated rhythmic spikes; sawed bass, hammered-on fingerboard work, and chordal strikes; grand piano switching between classical clarity and a remarkable closeness of play, sharp movements.

After an explosive start the following sets are comparatively grounded, each piece more readily defined. Moving Through, a new Wilson work, brings things down a notch, and lays a solemn background for Dresser to bring up the tonal versatility of the double bass, almost played like as a cello. The Promised Land is delivered as a head-banging rock piece, built on pushed bass lines, sharp keys and high energy coordination, Dresser and Wilson hitting together as it builds.

Part of the overall shape of Trio M is in the nuanced ways the three approach their instruments – together this presents something of an unconventional sound.

Wilson is a master of restricting his playing palette, often using only a small portion of the kit at a time but exploring it to its full. Dresser seems to consider the conventions of the double bass as a challenge, and spends much of his time pretending it is any smaller string instrument, or establishing recirculating drones and throbs more akin to a didgeridoo. Melford seems determined to demonstrate the full range of the piano, from looped rhythms to fantastical splurges.

The Stone, in its performative glass box, is quite a meta venue. Precious little separates you from the distractions of the street on one side, and the institutional corridor lighting and ambling on the other. The transparent walls enclosing an awkward afterthought of a space impaled by a central column mean a band has to work that little bit harder to generate an atmosphere for the audience who are performing as an audience. Trio M were evidently – and unsurprisingly – unperturbed, and were more than up to the task of keeping the audience focused on them, and not on themselves.