This brace of CDs from a decade back by jazz vocalist Judy Niemack (The Pheasantry, 4 & 5 July) forms a delightful compendium of her many talents, and confirms her as a jazz stylist and  lyricist across a wide variety of genres that thorougly embrace jazz in its many forms and expressions.

California-born, Niemack moved to New York City in 1977 having met and  performed with legendary tenor saxist, Warne Marsh, who studied and played  with Lennie Tristano in 1940s NYC. With her beautiful voice, fearless improvising and impressive musicianship, Niemack has worked with pianists Fred Hersh, Kenny Werner, Cedar Walton and Kenny Barron as well as with Lee Konitz, Gary Bartz and the Danish Radio Big Band. 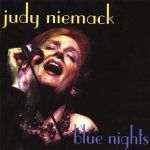 Niemack states: “Blue Nights shows off my mainstream, traditional side. I recorded it to share a modern take on some of my favourite songs which I have long loved.” A first-rate cast of sidemen comprising pianist Jim McNeely, bassist Dennis Irwin,  altoist Gary Bartz, trumpeter Don Sickler, drummer Victor Lewis and guitarist/arranger Jeanfrancois Prins all rise to the occasion with aplomb. A selection of songs ranging from Bluesette to Afro Blue to Lullaby of the Leaves clearly presents an expansive view on her versatility in so many genres. Niemack’s lyrics on Bill Evans’ Interplay, as well as Monk’s Mysteriso (“A Crazy Song To Sing“) give the songs the words that they deserve. After all, why not make it a story about how hard it is to sing this song! Indeed.

In The Sundance has bassist Rufus Reid as well as pianist Bruce Barth, drummer Bruno Castelluci and guitarist/ arranger Jeanfrancois Prins. helping Judy celebrate her favourite season: Summer. Inspired by the beauty of the sun she sings  a samba version of Burton Lane’s classic How About You as well as Ivan Lins’ Sails, which is given a breezy bossa-nova treatment. A rather  intimate  version of Victor Young’s Beautiful Love with Judy and Rufus Reid scores highly as does a Chet Baker favourite, Estate, a well covered Italian bossa-ballad composed by Bruno Martino with lyics by Jack Segal. This is given a signature treatment  by Niemack supported by a distinctive and  wrenchingly emotional scoring by Niemack’s partner in music and life, Jeanfrancois  Prins.

A distinctve pair of recordings that showcase a leading light of jazz vocals and vocalese.

Judy Niemack will be appearing at The Pheasantry in London on 4 & 5 July 2019.