Could Django Bates be about to say farewell to his long-standing Charlie Parker-dedicated project? If so, it won’t be before he joins his Belovèd trio to that other legendary jazz Parker, Evan, for a double birthday celebration at Wigmore Hall on 14 July: Charlie’s 100th (next year) and Evan’s 75th. Django spoke to John Fordham: 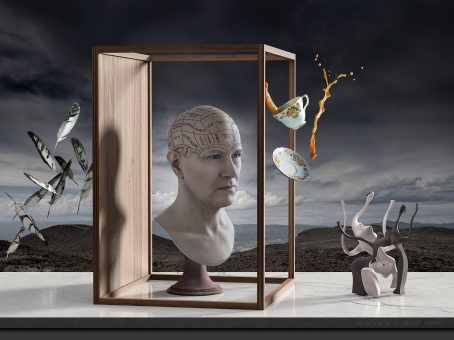 Pulling the rug from under grand occasions and pious aspirations has long been an irresistable temptation for Django Bates – multi-instrumentalist and bandleader, co-founder of legendary 1980s British orchestra Loose Tubes, inquisitive traveller between postbop, classical, South African and even circus music, composer for theatre and dance. The indefatigably curious, subversive, and serious musical one-off once defended his affection for surreal humour by defining his trade as “selling vibrations in the air. What’s more surreal than that?”

But even Bates, as he closes in on his 60th year, couldn’t avoid a moment of palpable pride on 23 May, when the Ivors Academy and PRS presented him with an Ivor Novello Award for the inimitable differences he’s made to the sound and evolution of jazz in Europe and the wider world over the years.

“It’s hard to know what to say about an award, because it’s just a kind of thumbs-up in the middle of what you’re doing from day to day,” the diffident recipient characteristically began by saying in his post-ceremony interview. “But it’s just wonderful, sometimes, to be allowed to have a moment of celebration, and to look back.” Bates made his feelings even more explicit in a tweet that followed the august celebrations  at a Mayfair hotel. “I love being part of the huge British jazz vista which stretches from Acker Bilk to Dudu Pukwana’s Zila, via Bex Burch’s Vula Viel,” he declared. “This is a serious moment for me, and I’m genuinely touched.”

If anyone imagines, however, that this marks the moment at which one of the most influential mavericks in British jazz history retires to an armchair to contemplate his memoirs and gaze at the Ivors’ weighty and famous bronze statuette of Euterpe, Greek muse of music and poetry, they can relax. Alongside his full-on teaching and playing obligations in Switzerland as Professor of Jazz at Bern’s University of the Arts, and following a trip around Europe rekindling Loose Tubes classics with intrigued students who weren’t born when that joyous juggernaut of a band got rolling, Bates’ next high-profile gig is at London’s Wigmore Hall on July 14 – a showcase for the Belovèd trio that has occupied much of his performing attention in the past 10 years, and a collaboration with saxophonist Evan Parker, one of the most adventurous and technically inventive improvisers of his era.

For this performance, Bates splices two themes united by the  Parker surname – the Belovèd trio’s founding dedication to bebop genius Charlie Parker  and what he calls a ‘Premature Celebration’ for Parker’s 2020 centenary, and a birthday tribute to the 75 year-old Evan Parker’s ongoing creativity as a unique virtuoso. Bates has been here before, having presided over the British saxophonist’s 60th at the genre-crossing Fuse Leeds festival in 2004, when he commissioned 60 bars of music from 60 composers (including Laurie Anderson, Carla Bley and Jah Wobble) that Parker ‘quilted’ into a more or less seamless work on the spot. But if this July’s performance will be a less structurally demanding way to say ‘happy birthday’, Django Bates’ relish for balancing the guidance of inspired composition and the freefall of fearless improvisation is as active as ever.

“I’ve occasionally thought of doing something like that Fuse Leeds piece for Evan again, adding the appropriate number of extra bars, but it’s been too big an organisational challenge so far,” Bates observes. “So this will be more like a jazz gig, with its roots in Charlie Parker – but I think the spirit of one Parker and the physical presence of the other will make it a special occasion. It’s been fascinating to see how Evan is preparing for it. Often he’s just wanted to see intros and outros and take the rest from there in performance, but this time he’s surprised me by wanting to see the music beforehand, really study the parts. He’s asked me to transpose tenor parts I’ve written for him as if they were alto parts, wanting to reflect Charlie Parker’s alto sound in the higher register of the tenor. He’s even been looking for a 1950s Grafton acrylic alto saxophone, because Charlie Parker played one. But I don’t think that has anything to do with wanting more preparation, or something more to fall back on. Evan’s a master improviser, and I think this is about a different kind of preparation, about opening up new avenues to improvise within. I love being onstage with him, he’s such a powerful presence, even if he’s just standing there. It always feels like a surprise, or an unexpected space or direction is about to happen.”

A much-shared Django Bates story is that when he was a jazz-loving teenager with no schoolfriends who liked jazz, he took to whistling Charlie Parker tunes on Beckenham railway station, and met saxophonist Steve Buckley (later to be a Loose Tubes member) for the first time that way, when Buckley whistled the tune back. Parker’s direct influence on Bates receded during the ‘90s and noughties  when one commission for his original work came hot on the heels of another. But in 2009 he formed the Belovèd trio with former students Petter Eldh on double bass and Peter Bruun on drums, to play radical yet devoted remakes of Charlie Parker’s classic themes, recording with the group on both his own Lost Marble label (Belovèd Bird) and for Manfred Eicher’s ECM (The Study of Touch). But though Tenacity, a big band recording of his 2013 BBC Proms concert featuring five Parker themes, is due for release next year, he feels that the Belovèd Bird chapter in his work may otherwise be closing now.

“I think the next trio album will move away from Charlie Parker,” Bates reflects. “When my father died last year, it felt like a signal  about that somehow – that influence he had on me, his amazing record collection full of jazz, African music, Romanian folk songs, and the house I lived in as a child, that had so much music going on in it. But Charlie Parker will always be with me, entwined in the melodic sense of what’s logical and beautiful. Like a lot of beautiful things that you hear and absorb and rework along the way.

“I was playing as a sideman on the Tunisian oud player Anouar Brahem’s Blue Maqams for ECM a couple of years ago, with Dave Holland on bass and Jack DeJohnette on drums – amazing lineup. During a soundcheck, I started playing Someday My Prince Will Come to myself, on one of ECM’s beautiful pianos, and Dave and Jack started joining in. Suddenly I felt I was transported into a kind of Keith Jarrett trio – a language I haven’t used for years, but it felt great. Funnily enough, receiving the Ivor Novello award – which I suppose was given to me for the things I’ve achieved in jazz over a long time – also made me think more about my past, and to enjoy the sense that I’ve been creative in music, and want to continue to be. That’s something I haven’t usually stopped to think about.” (pp)