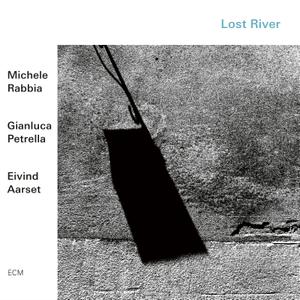 On What Floats Beneath (track three on this disc released at the end of May), there is the disconcerting sound of a series of chords strummed on an electric guitar – simple, relatively effect-free, pretty conventional, warm-toned electric guitar.

Why should this be disconcerting? Because the name of the guitarist on the CD cover is Eivind Aarset, Norwegian master of making a guitar sound like anything but. His place on a stage often looks more like an electrical engineer’s laboratory, and the sounds he creates usually have the other-worldliness of inter-galactic messages. So as not to throw his listeners completely, his contributions on the rest of Lost River (and probably some of what floats beneath that guitar on What Floats Beneath) are much more in keeping with the Aarset we know and love: clouds, glimmers and gleams which stretch under the music and disappear to the horizon.

One of the other names on the cover is Michele Rabbia, an Italian drummer/percussionist easily associated with Aarset – the pair have done many duo performances, and their use of electronics together with the way in which their sounds intertwine suggest they are journeyers along a very similar path in modern music.

The third name is, at first glance, the big surprise. Italian trombonist Gianluca Petrella would seem to come from a different modern jazz world, certainly if his contributions to the acoustic bands of Enrico Rava and Giovanni Guidi are our only prior knowledge of him. But, it turns out, the two Italians have played together before, and in addition to his jazz interests, Petrella has also created film soundtracks and is interested in contemporary composition and hip-hop.

Lost River is built of spontaneous three-way improvisations that bring new textures and interest to an area of music that frequently has the adjectives ‘ambient’ and ‘sonic’ attached, together with the adapted noun ‘soundscape’. What the three musicians bring to the project sounds like a perfect triangle of rhythm, setting and melody all bound together by an understanding that things created with zeros and ones in little boxes don’t need to sound like they come from an unnatural world. The imaginary landscapes these soundscapes create in the listener’s mind are far more likely to be the scenery we see around us than some science fiction land; they are also more likely to be blissful than dystopian.

The groups that arise when ECM stablemates are brought together often, in my experience, deliver some of the label’s most rewarding and unexpected releases. This is surely one.