The Kenny Wheeler Jazz Prize has its ninth recipient: saxophonist and composer Alexander Bone. The Royal Academy of Music and Edition Records are the joint promoters of this annual award. 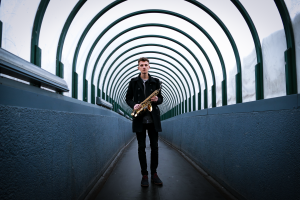 Here is the press release:

The Kenny Wheeler Jazz Prize is awarded each year to a young artist who demonstrates excellence in both performance and composition, and is selected from all graduating jazz musicians at the Royal Academy of Music, London. The prize includes the release of the artist’s proposed recording on the Edition Records label: Alexander Bone will release his album in 2020.

The judging panel, which consisted of Edition Records founder and CEO Dave Stapleton, the Academy’s Head of Jazz, Nick Smart, and Evan Parker, saxophonist and lifelong collaborator of the late Wheeler, met in June to decide the winner.

Evan Parker said “Alexander Bone impressed me not just in his writing, arranging and playing abilities, but in his giftedness in all three aspects of music performance.  The added quality, which was decisive in his winning the prize, is his keen sense of how to project all these skills.  He had not just assembled some like-minded and very gifted players to run through his charts, he seemed to have inspired them to share his vision for how a band can communicate, firstly amongst themselves, but by doing this to generate real involvement from the audience.”

Edition Records Founder and CEO Dave Stapleton commented “Each and every year I’m amazed at the breadth of talent and musicianship that is presented to us. The skill, command and facility they have as players is inspiring, and compositionally they are armed with a vast ability to write for both large and small ensembles with originality and vibrancy. Alexander Bone is a musician that exudes all these qualities in bucket loads, is energetically confident yet humble and engaging. We are looking forward to working with him in developing his career, which has already seen him win awards and acclaim. To collaborate with him on his debut and to consolidate the praise he has earned, will be a joy.”