English jazz and the Somerset connection

By peterbacon on 27 June 2019 • ( 1 Comment )
Sebastian’s regular London Column appears today in the July-August issue of the German magazine JAZZTHETIK (available throughout the German-speaking world). Here is the new column in English on the theme of…Somerset:
Question: What do all of the following have in common? Pee Wee Ellis (formerly with James Brown and Van Morrison), Jason Rebello (for several years music director for Sting and Jeff Beck), Iain Ballamy (Loose Tubes, Quercus), Yuri Goloubev (Gwilym Simcock Trio) and Dave Smith (drummer for Robert Plant), pianist John Law… Answer: they all live in the English county of Somerset.

What can possibly have drawn them all there? Somerset is best known for things like Cheddar cheese, sickly sweet apple cider, and the novelty band The Wurzels, who sing jokey songs about combine harvesters in local dialect. Yes, the countryside is appealing, house prices are far more reasonable than in London, but that clearly doesn’t explain the presence in the county of so much jazz eminence… 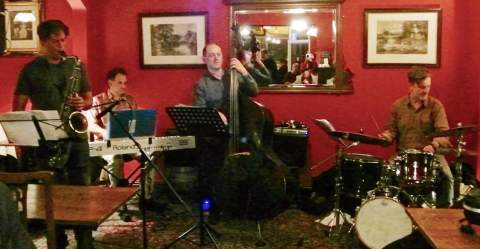 In Pee Wee Ellis’s case, he got to know the village of Beckington where Van Morrison owned a recording studio. The American saxophonist took a liking to the area, stayed, and made Kleinstadt Frome his home. For another great and highly individual saxophonist Iain Ballamy, it was a number of reasons, not least a desire to escape from the oppressive go-getting materalism of people in the region around London. He likes to take time over his projects (“I don’t flash-fry”, he quips) and is pleased to be slowly developing a quartet including fellow top musicians who live in the area: Jason Rebello and drummer Mark Whitlam who both live nearby in the beautiful, historic spa city of Bath.

Pianist Jason Rebello himself has no regrets about having escaped his native London two decades ago. Shortly after he moved, he started touring the world, so Somerset was a good base. And as for drummer Dave Smith it was partly the presence of Peter Gabriel’s Real World Studios just over the county boundary in Box in Wiltshire, and also an old friend from childhood, saxophonist Sam Crockatt.

One thing jazz musicians do know how to do, however, and that is to inspire. And saxophonist Josh Arcoleo’s true story goes like this: his mother approached Pee Wee Ellis who was practising outdoors in a churchyard and asked him to give her 13-year-old son his first saxophone lesson. Arcoleo is now one of the top young players in London. And another tendency of jazz musicians is to want to build and sustain the scene. Dave Smith has hosted one Loop Collective Festival in Frome and will be putting on a day of top bands there with Elliot Galvin and Mark Lockheart on 11 July. “What I want to do is to bring the highest quality music to this small town.”

Click on this cover for The London Column in JAZZTHETIK