“What you are hearing is natural. It is real,” said Roberto Fonseca at the mid-point of last night’s concert. The Cuban musician has been here at the Montreal Festival in the higher-profile, big-stage role of Omara Portuondo’s musical director. He was also given a three-night residency at the Gesu Cultural Centre, and this concert on the Canada Day holiday was the finale of that series. Fonseca was explaining that he and DJ/producer/remixer and percussionist Joe (Joaquin) Claussel had had only a short and cursory discussion of what they would do, and they were mostly trusting the moment, each other and Fonseca’s regular bassist, “my brother” Yandy Martinez. 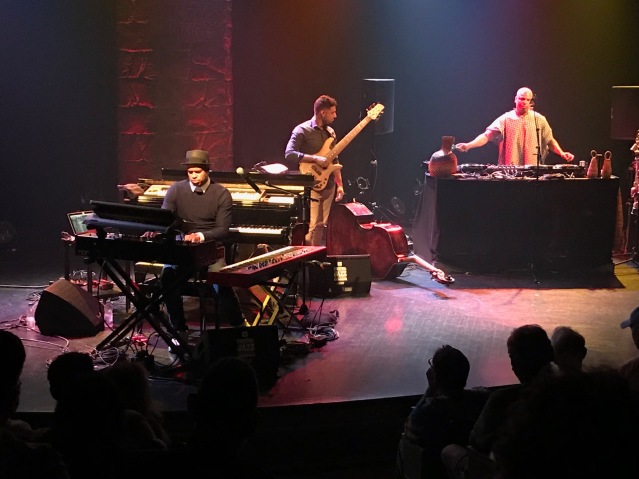 I have to make a confession: when I see the words “Deep House DJ,” in most circumstances I would normally, quickly and instinctively reach for the OFF switch, or possibly use comedian Peter Cook’s always-useful excuse: “Oh dear. I find I’m watching television that night.” And yet Fonseca is such a multi-faceted musician, a strong instinct to give him the benefit of the doubt took me out of curiosity to what, I believe, was a premiere. And I’m very glad I went. To witness this kind of unusual encounter is perhaps that festivals can make happen. In the interview we did with Montreal Festival co-founder André Ménard earlier this year, it was one of the events he was particularly looking forward to.

Claussel is a New Yorker with Puerto Rican roots, and what he did incredibly effectively was to combine “real” percussion sounds with those of a drum pad and sequencer. His whole set-up becomes one instrument. He is also an engaging figure to watch with theatrical gestures and facial expressions which show the delight he has in unveiling new sounds and moods.

Fonseca has an astonishingly way of creating an anticipation, of giving a compelling dramaturgy to his performance as I witnessed last summer at Ronnie Scott’s. There is always an intent, and a direction to what he does. He may be just recycling a four-bar figure, but it always has a purpose, it is leading somewhere. And Fonseca also uses the resources of his synethsizer to create a whole variety of moods. There was a Bach-ian church organ, an agile muted trumpet solo using his right hand.

And what the two did together was to create in every tune an irresistible sense of forward motion and flow. And when Claussel went, with an air of triumph and a smile into House DJ mode, he was always feigning, or dropping beats out, creating variety, interest, something more than just the wish to get up and dance. Which a fair part of the audience did. And yet this was far more than a soundtrack. It was music, living breathing, constantly bringing surprises. Totally enlivening. The problem comes later: the danger for this particular listener at this vast festival… is that the next few gigs can seem overly deliberate, or even mechanical.