I cannot possibly let one sublime act of generosity on Friday night from Montreal drummer Jim Doxas go unnoticed. At the end of the launch gig for his quartet album Homebound, he announced that everyone who had attended the event could receive the CD for free.

It occurred to me that rather than writing a sixth and last overnight single gig review (*) from the world’s largest jazz festival (Source: Guinness Book of Records), what I really wanted to write about was the spirit of the musicians in this town. And the Jim Doxas Homebound album launch is a very good place to start.

The instrumentation is the same as the album Riverside that the drummer made in 2014 with Dave Douglas, Steve Swallow, and Jim’s saxophonist brother Chet, in other words the instrumental line-up of the classic Ornette Coleman quartet albums. Whereas Riverside had a specific homage to the sound-world of the Jimmy Giuffre trio, this quartet of Montreal-based musicians finds its core vibe and inspiration in calm, balance and folk melodies. And they really succeed

The other musicians in this quartet don’t have the profile of those on Riverside, but this is a wonderful group. Start at the bottom. There seem to be quite a few decisive, totally dependable, world-class bassists in Montreal. In this ‘City of Saints’, each brings to mind the phrase “upon this rock I will build my church.” In fact I’m starting to wonder how many more might be out there… I have heard Éric Lagacé in the Oliver Jones Trio, I have heard Rémi-Jean LeBlanc in several contexts, and am very pleased to have witnessed the smiling impeccability and the resonant clarity of Adrian Vedady. Saxophonist Al Mclean is one of the Montreal-based musicians whose roots are in British Columbia, and is a really strong and adaptable presence. He seems so pensive… and yet his bio tells me he’s been in one of Azar Lawrence’s LA bands. I can’t compute that. The trumpeter is Lex (Alexis) French, a native New Zealander. I trust the musician buzz in any city, and especially here; this relatively new arrival is being much talked-about. 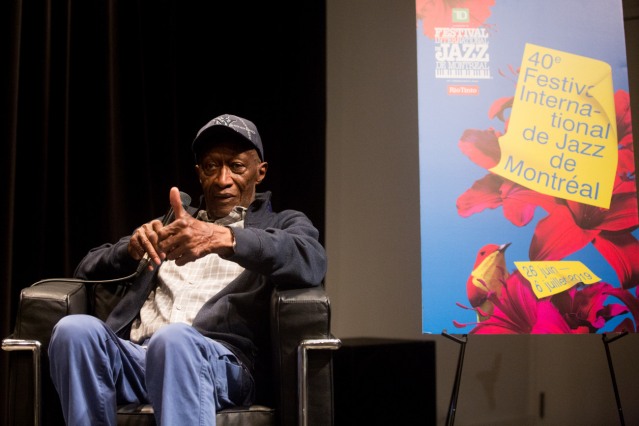 The festival gave its Oscar Peterson prize to 88-year-old pianist Wray Downes, who is performing on the closing night of the festival with his trio. At the press conference for the award he remembered the musically unforgiving atmosphere of Peterson’s Advanced School of Contemporary Music in Toronto:  “There were some brutal lessons. Some of us survived.” He had fond memories of time spend studying classical piano in London, and told me he had got to know musicians like Tubby Hayes and Alan Clare. Wray is a delightful man, and it was very good to see him being honoured.

There was one gig I had been looking forward to which got cancelled, a duo of trumpeter Rachel Therrien and pianist Gentiane MG. Gentiane MG was one of the modest stars of last year’s concert in honour of Carla Bley, and Brooklyn-based Therrien has a wonderful can-do spirit and is involved in all kinds of projects. The CD WDYT (why don’t you try) with her Montreal group brims with life and I heard good reports of the live performance. 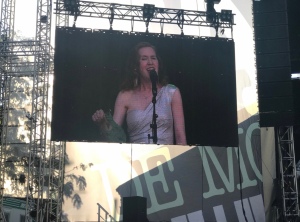 From an older generation I heard singer Alex Pangman and her band. She is from Toronto but the story she told from the stage touched the heart. She is a Cystic Fibrosis sufferer who has needed double lung transplants, a first one in 2008 and a second in 2013 (story here). If she approaches old risqué songs like “You’ve got the right key but you’re working on the wrong hole” from 1924 with a certain fearlessness and good humour, it is hardly surprising.

Since this is the 40th festival, and also André Ménard’s last, there was a retrospective radio show for the American station WBGO. The focus, of the early part of the show was on the festival’s ‘patron saint’ Oscar Peterson and its ‘godfather’ Oliver Jones. Lorraine Desmarais touched every heart in the room with Peterson’s Hymn to Freedom

That session also served as a reminder of the quality of players around here. Jean-Pierre Zanella must be one of the best big band lead alto saxophonists in the world, and is a fabulous soloist. There was a glimpse of him at the WBGO 40 years radio show, and he also made every one of his moments in the solo limelight count as a member of the Orchestre National de Jazz de Montreal in their (to my ears, the audience loved it!) otiose tribute to Dr Dre. 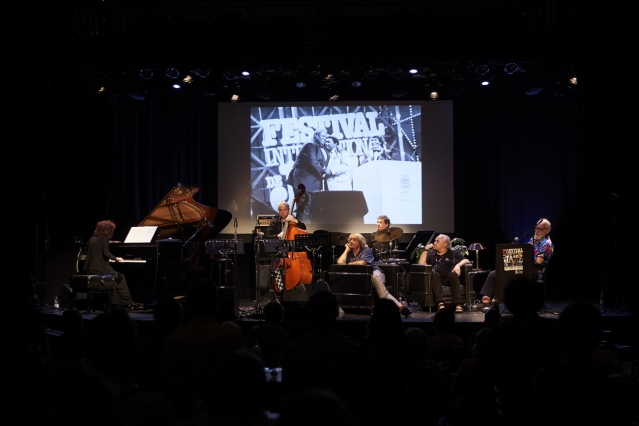 An article like this which tries to do justice to the sheer quality and variety of music around here will miss out more than it includes. For most Montrealers, the festival is a very different one from that seen by the critics. One wanders from freestage to freestage hearing great tight bands and being part of an audience out in the  summer just peacefully enjoying itself. In my bain de foule I heard a fine band accompanying guitarist Jordan Officer on the main freestage last night, and then strolled a few hundred metres eastwards, where my ears were also caught by pop/R&B singer Léonie Gray, whose recordings don’t yet seem to convey her strength as live performer. And off into the night. I cannot help loving the warmth, both literal and metaphorical, of this music-loving city. 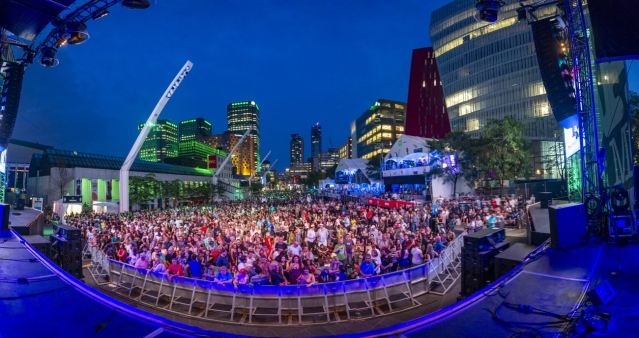