My first time at any big outdoor music festival, I jumped off the bus on Saturday afternoon, full of excitement with a list of artists in my pocket that I had scoped out in advance with timings organised, so as not to miss anything important.

It didn’t take me long to realise that if I walked fast enough, I’d be able to catch a lot more that I had planned. So, I mentally mapped out my journey from Main Stage to Big Top to Arena to Bandstand and even found the Jazz Lounge where interviews and other talks happened throughout the day.

After the outrageously difficult decision of what to have for lunch, I grabbed my nosh and headed to The Arena first, to check out Norwegian band Fieh. I had not heard of them before their festival listing but was intrigued by their online single, Glue. The 8-piece band of multi-instrumentalists played a mix of D’Angelo inspired neo-soul songs with their own spin and entertaining set. Shout out specifically to the trumpeter Lyder Øvreås Røed and Jørgen Kasbo on guitar for their crafty solos.

Next up, not on my list, I found myself in the Big Top joining jazz and soul singer Judi Jackson. Originally from Virginia, USA, she played songs from her newest album Live in London. She absolutely nailed Nina Simone’s Sinnerman. As droves of passing people poured into the tent drawn by her energy, she played a few of her originals, as well, featuring Jay Phelps on the trumpet and surprising everyone with a thrilling crowd surf. She has a true artist’s soul.

During a visit to the Love Supremium area for a rest, I sat near a small empty stage when Tank from the band Tank and the Bangas appeared with one of the Bangas for a quick rehearsal. She intimately sang I’ll Be Seeing You to essentially no one but by the end of the song, throngs of people applauded. They shared one more new song for the group before heading off for the next leg of their tour in Romania. A terrific surprise – her voice is something else. 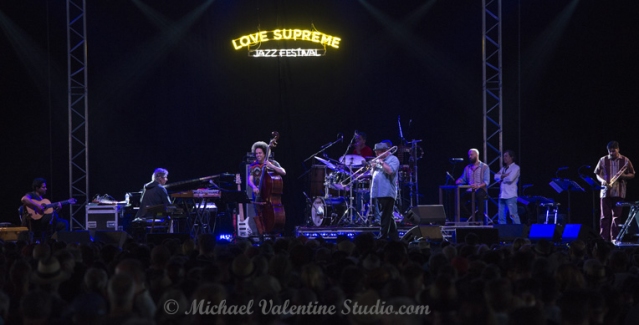 Michael League, bass player and founder of Snarky Puppy, was in conversation with Jane Cornwell in the Jazz Lounge shortly after, where he talked about his own musical evolution, being apolitical in a very political climate and how education is so important to the band. They later performed songs from their latest album Immigrance in the big top with lots of new hip grooves and the same spirit that they’re famous for bringing in a live setting. 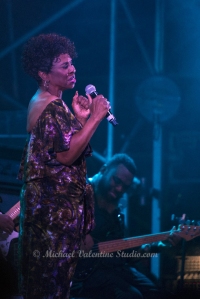 In between the Snarky Puppy events, I blocked off the slot in which Chick Corea and his Spanish Heart Band were playing the Big Top. I was absolutely blown away by the camaraderie amongst the band members. Each person was given their platform (in some cases, literally) to do their thing, and they were so respectful and encouraging to each other. This didn’t surprise me, as Corea has always put a strong emphasis on positivity and collaboration. The music was full of Spanish flavour and even included a Flamenco dancer who joined in the improvisation of several songs – treated as an equal in the band. They, of course, played Spain with full audience participation, an absolutely mesmerizing moment.

To top it all off, I sat in the cool night air and listened to Gladys Knight sing some of her classics, including Licence to Kill. She spoke a lot about love and how important it is to share it – a fine way to end the evening full of music, from the fans and the artists, it was definitely a  Love Surpreme for me.