Jazz often looks backwards and forwards at the same time, a kind of nostalgia for the present. Italian trio Nostalgia Progressiva looked back to British progressive rock, in particular songs by King Crimson, reworking them with jazz and ambient grooves.

The Festival’s outdoor gigs involve an element of risk-taking, but Director Klaus Widmann seemed to have a hotline to the weather, as torrential rain from the louring mountains behind the Parco Semirurali stopped just in time. Boris Savoldelli brought an Elvis Costello vocal timbre and looped sounds to Moonchild, layered behind Maurizio Brunod’s guitar. The electronic subtones of Formentera Lady erupted through the amphitheatre floor; a trip hop groove sustained Brunod’s funky but unhurried solo, and Giorgio Li Calzi’s trumpet, which had some of the ethereal jazz sounds of Arve Henriksen. Matte Kudasai, perhaps pitched a little high, had melodic muted trumpet embroidering the vocal lines.

On one shore of Lake Caldaro, yellow storm clouds gathered; on the other the sun shone. Barionda, four baritones and a drummer, created their own irrepressible micro- climate. Their name plays on the Italian word “baraonda” (“quite a mess”) and their complex arrangements were tight, but also had a Mingus-like looseness. They drew on the American big band tradition as well as funk and free jazz. 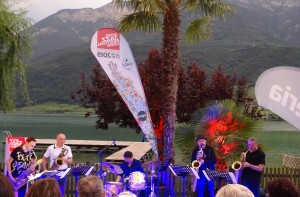 In a piece by Austrian Florian Bramböck, inspired by Africa, Afro-Latin drumming from Mauro Beggio created electricity. And the lightning across the lake was echoed in Bramböck’s altissimo squeals, contrasting with deep tones of the other baris. Italian Helga Plankensteiner’s No Ballad No Cry opened with Ellingtonian sweet harmonies, her solo full of thoughtful boppiness. Argentinian Javier Girotto let rip, soloing freely in tandem with the drums, as the ballad mood dissipated. In deference to Gerry Mulligan, Bernie’s Tune was swung with joyful soli, while (rough translation) Plant the Potatoes rocked out in ’60s style; in another piece, the saxes riffed funkily, like slinky elephants. Girotto introduced one original with an extended cadenza, part Bach, part bop, with an old-fashioned vibrato, till Giorgio Beberi’s counter lines came in. I Remember Dizzy harked back to A Night in Tunisia, while Conclusion felt like a rocky brass band. They brought the past into the present with brio and fun. 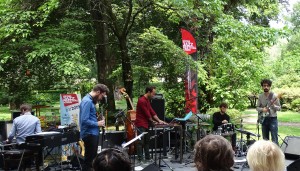 Italian/French band Matteo Bortone’s ‘Travelers’ +1’s highly original contemporary jazz compositions drew on classical music and progressive rock, in the garden of Bolzano’s Palais Toggenburg, surrounded by trees and birdsong. Bortone’s opening composition created a virtual garden, full of eerily beautiful electronic sounds and virtuosic solos. When he moved on to double bass, his phrases circled round Francesco Diodati’s guitar like Dave Holland with Kevin Eubanks. The bass held the groove as Ariel Tessier drummed freely. Rain didn’t stop play, as a canopy was rushed on to protect the band, and trees sheltered the audience.

Another of Bortone’s new pieces had a Head Hunters vibe (Yannick Lestra on Fender Rhodes) but with more modern, dissonant harmonies, and a well-buried time signature. Tenor player Julien Pontvianne had written specially for the band: thundery electronic textures resonated with the weather, Beethovian touches and perhaps a Radiohead influence. The atmosphere was sealed with a voice from Twin Peaks: “We are like the dreamer who dreams.” A slow meditative piece recalled Charles Lloyd: they went for the slow burn, rich-toned sax and drums building freely. Future Past looked back to the intricate energy of the Mahavishnu Orchestra, with an inspiring guitar/drum duet. In Bortone’s words: “In Italy we say- wet concert, lucky concert!”