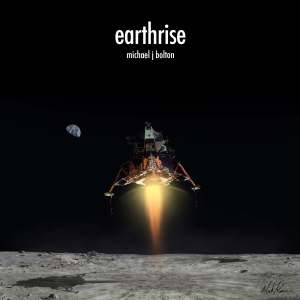 With the anniversary of the moon landing upon us, it’s not surprising jazz musicians – like other artists – might seek inspiration from the Apollo missions, and use the leaving of earth to find a new musical world to explore. One such musician is British electric bassist, composer and session musician Michael J. Bolton; the J clearly there to avoid being mistaken for the Samson-haired soft soul singer of the same name.

I’ve not heard of his music before, but am a sucker for any electric-bass led album, and I was pleasantly surprised with this cut of power jazz, which is orchestrated in such a way that it could easily fit alongside a BBC4 retrospective of the mission, such is the grandeur and awe in parts of the music (indeed, a 2009 BBC 4 documentary was the spark for this composition).

The electric bass – deep in tone, sonorous, rocket-rumbling – is a suitable instrument with which to tour the earth’s immediate surroundings. The crew of this musical mission (including some new names to me) is: Mike Walker on guitar, Neil Yates on trumpet and flugelhorn, Marc Russo and Tim Garland guesting on saxophones, David Hentschel on synths, Matthew Johns on piano, Alex Smith on drums and Noelle Rollings on vocals. It’s a big crew, but the seven tunes offer enough space to avoid the feeling of over-manning.

The first track, understandably, is The Launch – all raw power, drum crashes, sonic thrusts; indeed, it’s rather too rumbustious to be melodically satisfying. Nevertheless it has some nice proggy moments, especially from the guitar.

Things perk up with Trans Lunar Injection, on which Russo’s stylised, Sanborn-like, process-heavy soprano saxophone works well in marking the acceleration and transition towards lunar orbit, with Hentschel’s keyboards – warm and luxuriant, in contrast to the coldness of space – adding a thick buffer of sound with which the lead instruments can slingshot around. It’s dramatic and somewhat glorious in its bombast.

As the Apollo mission decelerated upon reaching the moon, this album does too on track three, Arrow of Time, which is the slowest of ballads, almost to the extent of being a soundscape until Yates’ flugelhorn kicks in with a motif that is as chilling as the lunar surface, and here lacking a bit of atmosphere. But, there is some excellent guitar and propulsive bass work from Bolton which compensates. This, the longest track, steadily improves, but it takes a while.

Earthrise, the title track, has a Ponty-esque opening, with a touch of vocalisation from Rollings giving it an outer space feel, with some nice Metheny-lite playing from Walker on guitar. As with the original Earthrise photo – when humankind first saw Earth marooned in the blackness of space from the Apollo 8 mission a few years earlier – Neil Yates’ flugelhorn horn is the dramatic image for this tune, as it heralds an expansive end.

The best tune is the sixth, The Eagle, where Bolton and crew nail the landing on this album’s Sea of Tranquility with a tune that’s reaching out to explore. There are touches of the Corea Elektric band sound, and while Bolton’s playing is – Michael Collins-like – somewhat in the background, he is clearly pushing the band to its destination with deep, low-end transmissions and simple, propulsive playing, again with super soloing from Yates.

The last track of course is The Return, which is suitably triumphant and positive in tone, though it kicks off with a heartbeat bass drum and heavy, heavy bass with dramatic synth strings. There is a feeling of musical risk in the soloing as the band reaches Earth’s atmosphere, like it could go either way.

You can tell they reach home safely in the exultant, celebratory tone of Garland’s guest solo, which serves as this album’s ticker tape parade, bringing an on-the-whole dramatic musical journey (albeit one that faced a few minor mission challenges) to a satisfying close.

A lot of work has gone into getting this crew to their ultimate destination and while the musical exploration does at times risk missing its trajectory, there’s plenty to like in this concept. When as a musician you have one of the great human endeavours to draw upon, it must be very hard not to make something suitable as a tribute, and Mr Bolton’s is a worthy salute to Apollo. Per ardua, ad astra!

I’m intrigued, though, as to what a ‘moon piano’ – listed in the instruments used – might be!