Evan Parker with Birds: For Steve Lacy is a remarkable recording, the very first release on CD, in 2004, of the pioneering Treader label run by John Coxon and Ashley Wales. Treader’s commitment to the adventurous in improvised and composed works with a coterie of distinguished and like-minded artists whose roots are in jazz and the exploratory extends to the highest production values, not only in sound but also its distinguished cover designs by Frauke Stegmann. 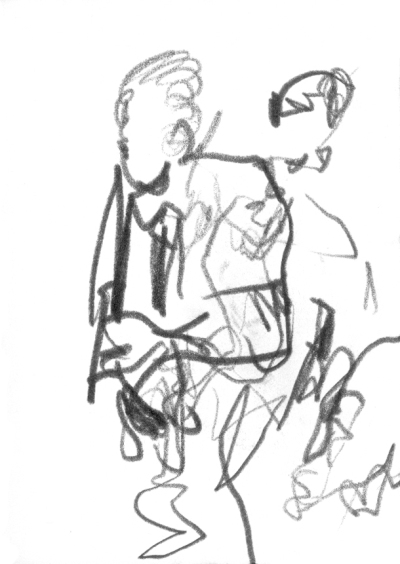 On the original recording Evan Parker ‘duets’ mesmerically with field recordings of birds compiled by Wales in a soundscape created jointly by Wales and Coxon, recalling Schwartzwaldfahrt made in 1977 by Peter Brötzmann and Han Bennink where the two musicians perform with instruments and nature’s elements, atmospheres and sounds, outdoors in the Black Forest.

At Cafe Oto, Parker, Coxon and Wales, with invited percussionist, Mark Sanders revisited the concept. Parker mentioned to me, before the performance, that this was not to be a carbon copy, rather an evolution of the original concept, which fifteen years on, was just the approach one hoped for.

From stark bird calls flying in from left-of-centre-field the quartet built up a resoundingly sensitive, five-way discourse, the other unseen participant being the unprompted and unpredictable interventions and subtexts of the avian calls and a broad range of sampled sounds from LPs, CDs and captured sound offered by Coxon and Wales from behind their sound desks.

Parker, the model of concentration and deep immersion on soprano sax, and Sanders, brightly resourceful on percussion, were the analogue balances to the processed electronics. As the crafted patterns, unique statements and liminal subtexts became intensely interwoven, the quartet’s highly informed, mutual awareness elevated the proposition to a near-transcendental plateau.

A spell of interjections of breaths from Parker gave additional articulation to the beautifully crafted, complex streams of pitches which he drew out from the saxophone (his ongoing homage to Steve Lacy, whom he has described as ‘patron saint of the soprano saxophone’) and complemented the intuitive flow of metallic taps and shimmering, percussive syntax from Sanders. With Coxon and Wales pushing the boundaries with clips of purposeful bird song, the merest flashes of recorded big band, thrumming industrial shudders and a loosely defined ethereal ambience, the quartet staked out the playing field with great sensitivity and imagination. And in a passage with Coxon playing playing what looked like a melodica (but wasn’t) trading figures with Parker, the circle was semi-squared.

A beautiful way to move on from the early, recorded masterpiece. Hopefully this might have been recorded, too, for potential release.

A shorter piece with a fleet pace ensued to bring the audience gently back to earth.

Prior to the main performance, Seymour Wright gave an extraordinarily uncompromising and rivetting solo reading of Anthony Braxton’s Composition 99G on soprano sax. In the best possible way he demonstrated with complete single-mindedness that pushing the envelope really means that.

Evan Parker with Birds is part of Music and Other Living Creatures, a series at Cafe OTO (curated by OTO Projects) dedicated to music about, with, or by other living creatures.